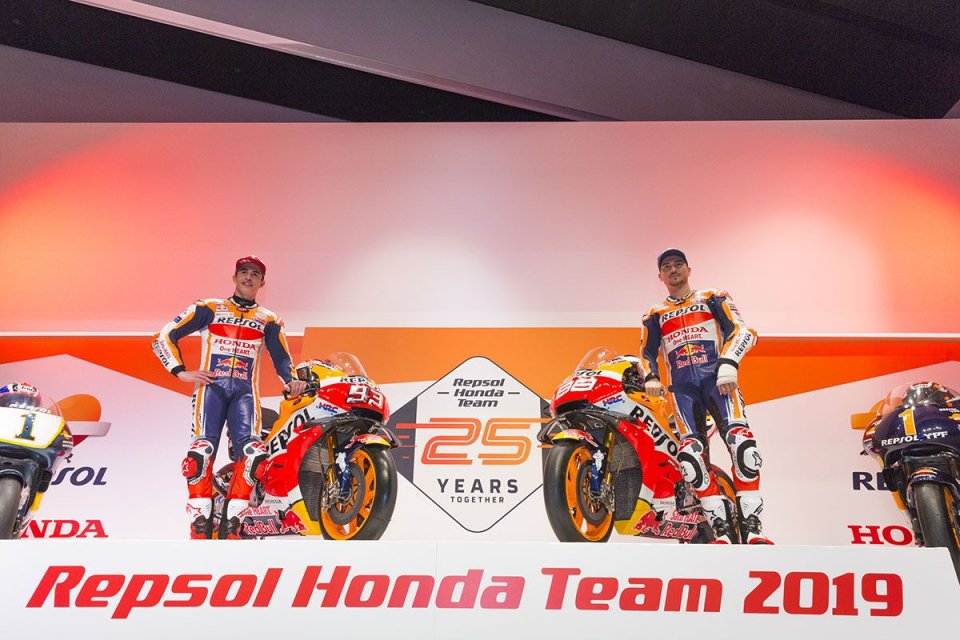 The white cast protrudes from his suit, a reminder of the recent surgery on his left scaphoid. Jorge Lorenzo hoped to embark on the journey with Repsol Honda in better health, but the recent injury has not affected his mood.

“I didn't expect to hurt myself but you can't change the past and I have to accept the situation with professionalism and remain positive” comments the Majorcan.

How did the accident occur?
“It was my first day of training this year and I was at a track near Verona, Cogollo in Badia Calavena, doing some dirt track riding. I made a mistake, because I didn't check the track carefully enough and at one point the ground was wet, muddy, even though it looked dry at first glance. As I rode over it, it all happened very quickly, the front locked and I found myself on the ground. A stupid crash”.

And it cost you a fractured scaphoid…
“My wrist wasn't completely healed after last year's injury and this contributed to the fracture. The scaphoid is a strange bone, luckily medicine has come on in leaps and bounds in recent years. Once upon a time it would have taken 6 or 7 months to heal, now it'll be a distant memory in a month or two”.

But you will miss the Sepang test…
“There would be no point riding two weeks after surgery. I should be at around 80% by the Qatar test, that's how it is, I was unlucky and now have to deal with the situation as best I can. In the end, I'll start the championship having completed the same number of tests as I did with Ducati”.

You were able to ride the Honda at Valencia and Jerez, what were your first impressions?
“I immediately liked the bike as soon as I got on, i realised how small the bike is, and lower, this is something that gives you more confidence, especially when there is little grip. The bike's strengths are its agility and corner entry abilities. There are some defects too, that's only normal, but we won't talk about that”.

Is it a very physical bike to ride?
“Quite the contrary, less physical than the Ducati. I don't think I'll have any problems there".

You're on a brand new bike and also have a new team-mate in Marquez. How do you feel alongside him?
“In a certain sense, it reminds me of my first year in MotoGP with Valentino. he was at the height of his career and knew the Yamaha very well, the same goes for Marc now with the Honda. Marquez starts as favourite, he's a phenomenon and I know I can learn a lot from him. I know I need to be humble”.

Many expect to see fireworks between you…
“Right now, it's more likely that he'll beat me, rather than the other way round, and you know I always tell the truth (he laughs). I think that our rivals hope we'll fight, but I don't think about these things. The only way to put pressure on your rival is to be fast on track and that's what I will try to do”.

So there are no negatives to this new pairing?
“Many people see only the negatives, but I think there are more positives. We will push each other, because when your team-mate beats you, you have no excuses. Remember what happened between Senna and Prost? It was a love/hate relationship that pushes you to improve, and it will be the same between me and Marc”.

But last year, after the Aragon incident, you attacked Marquez…
“Let's not make a drama out of that incident. Marc and I are simply two different people, with different ways of approaching the races and life. We cleared it up and I put no importance on what happened back then. Of course it's possible that something happens between us on track, but I think the chances are low. You always respect your team-mate, but when you're fighting for the win at the last corner... well, anything can happen”.

You are very optimistic…
“The only difference with my former team-mates is that we both speak Spanish, so it'll be easier to understand the jokes (he laughs). Joking aside, we are both mature riders and maybe we will argue but I hope that, if it happens, it will be because we are fighting for something important”.

Is there a risk of another walk, like that between you and Rossi in Yamaha?
"I don't think Puig would allow it, that's something they came up with".

How has the team welcomed you?
“It's all on a different level here, also from a technical standpoint, I've seen incredible precision. You all know how hard the first part of last season was for me, I was giving it my all but the results failed to come. My value as a rider rapidly dropped and I started to realise that the future might be complicated for me”.

How did you react?
“I knew I still had the passion for racing, for winning, and I started talking to Honda. It wasn't easy at first, but this possibility arose and in two weeks my racing life changed - I signed with HRC and then won at Mugello”.

Now a new challenge awaits…
“And I'm pleased and proud to take it on, for sure. I have faith and will work hard to achieve the best possible results. In the end, I managed to do that with the Ducati, a bike that required a very different riding style to mine and one with which only Stoner has managed to win the title. All that experience will help me to adapt more quickly to the Honda”.

Do you think you will wear HRC colours until the end of your career?
“I answered yes when I was with Yamaha and then again with Ducati... this time I prefer to keep quiet!” (he laughs)

Do you have a particular wish this season?
"To get back to full fitness and suffer no more injuries, then the results will arrive".