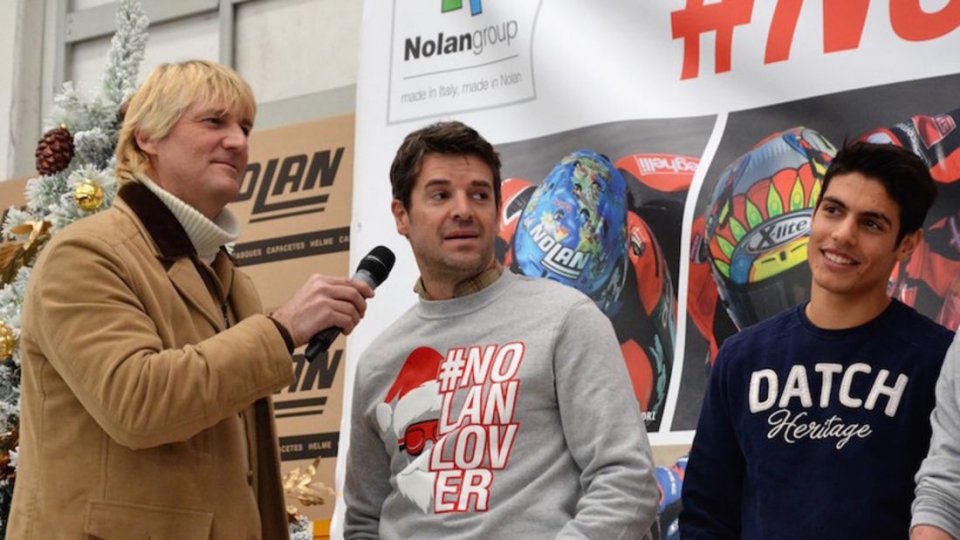 An excellent rider of prototypes, having scored two GP race wins and 24 podiums in all, as well as a Superbike world champion: Carlos Checa was the last rider to bring a WorldSBK title home for Ducati, in 2011 and while wearing Althea team colours.

Carlos, who has worn Nolan and X-Lite helmets since 1993, was in attendance at the Italian helmet manufacturer's Christmas party and spoke about how he views the production-derived paddock.

“I think that the championship is still very interesting. The racing sees production-derived bikes prepared to their maximum potential and the lap times serve as a benchmark. I've recently tested the Ducati V4 and I would say that it is just like a MotoGP from 8 years ago. Those who can buy it to go track riding will really feel like they are racing. The public likes the fact that the Superbikes go that fast, because those watching the races want to be able to buy a road model that is really close to the performance of the MotoGP bikes. This is the positive aspect of Superbike, though there is a problem”.

Checa knows the old saying ‘Race on Sunday, sell on Monday”, so common in the 80s and 90s, back when the figures were impressive.

“The real problem is not related to the championship, but to bike sales. The supersport market is struggling to make progress. A bike is built in the factory with the intention of being sold, as well as participating in championships and gaining visibility. If sports models are not selling, then there is a contradiction. MotoGP already puts prototypes on track that the public cannot buy, Superbike needs to be different, I would like it if all manufacturers took part directly, as Kawasaki. is doing. Right now, Rea is the best rider and can enjoy the work he's done with the KRT team, the most consistent team in terms of their work at the track. The other manufacturers, in one way or another, have undergone various changes that haven't helped in terms of wins. Yamaha is back and is growing, I'd like to see Honda taking more interest in the series, and Ducati, with the new V4, can do well too”.

What does Ducati need to do to beat Kawasaki?

“It must continue to work and give continuity to the V4 project. The factory team has two great riders, Chaz Davies  is always strong and at the limit, Alvaro Bautista debuts in a championship he has yet to discover. The bike has a solid base, the level of competition is very high, we'll see”.

You know Alvero well. What advice would you give Bautista?

“Alvaro is an expert rider, he has won a world title, he knows how and what to do. Bautista knows the timings - when he needs to attack, he will, when he needs to manage the situation, he'll do just that. The rider and team will make up a cohesive work group. Alvaro will be racing in a championship that, visibility wise, is less stressful than the MotoGP and this could be an advantage. He will be able to race calmly, and without pressure, I don't think he has anything to prove in his first year in Superbike”.

“We need to wait and see what will happen. I think that the two-race format worked well, though the solution with one single race would be best. The public will see more races over the course of the weekend and will perhaps struggle to watch them all. Having three races might be of interest to the TV channels, that's a plus. But the single race is more exciting. The riders? They will give it their all but if there is a one rider who dominates, like Rea has done in recent years, then there's a risk that the championship will be over by mid-season. Everything changes mentally and physically, only the track will tell if this has been a good decision or not. They will only use one bike, but I don't agree with that, it would be better to go back to having two bikes per rider, it's not true that having only one saves money, in fact I think the opposite is true”.