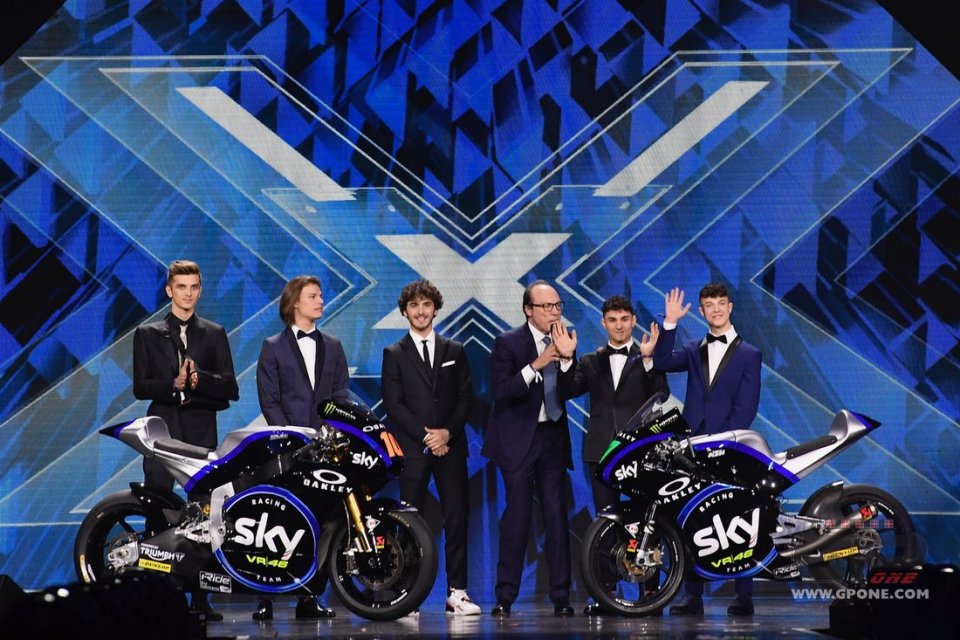 As is now tradition, the last event of the year before the Christmas vacation for the Sky Racing Team VR46 riders was the X Factor Italy final. During the show, Luca Marini, Nicolò Bulega, Dennis Foggia and Celestino Vietti Ramus, accompanied by Team Manager Pablo Nieto and world champion Francesco Bagnaia, unveiled the 2019 season livery of their Moto2 and Moto3 bikes.

After a record-breaking 2018, which brought a first world title, 9 race wins, 7 poles and 4 different riders on the podium,  the Team, founded in 2014, heads into the 2019 season with four bikes across two categories: in Moto2, Nicolò Bulega will flank Luca Marini on the Kalex while in Moto3, Celestino Vietti Ramus will race alongside Dennis Foggia on the KTM.

The new Moto2 pairing will be getting to grips with various technical changes. Marini, who retains race number 10, was already very fast in initial testing with the new Triumph engine while Bulega is set to debut in the intermediate category with #11. In Moto3, after having closed the 2018 season on a high, riders Foggia and Vietti Ramus will line up with race numbers 7 and 13, both more than ready to challenge on track come the new year.

The bikes will also boasts a new livery, with updated colours and lines and a touch of light grey on the tank and riders' suits. A play on contrast and light, thanks to the presence of chrome-plated sky blue, which brings a freshness to the tried and tested graphics of recent years.