In a time of great change for his team in MotoGP, with its move to KTM, Hervè Poncharal will continue to be present also in Moto2, with the same Austrian manufacturer. The French squad will take on the same role for KTM in Moto2 as it will in MotoGP. It will receive 100% factory material and is tasked with helping young talents to grow.

In 2019, the riders Poncharal has chosen are Marco Bezzecchi and Philipp Oettl, both of whom will debut in the category and both of whom are emerging talents on the international landscape. The new adventure with KTM in the intermediate class coincides with what is a year of great change in the category, with the move from the Honda engine to the Triumph three-cylinder, as well as the arrival of Magneti Marelli in terms of electronics. Many new features then, Poncharal confirming his enthusiasm following the Jerez test, which provided a first real taste of 2019.

"We were quick despite not having had much dry track time. We can definitely improve significantly, we need to get to grips with the new electronics, and sort the set-up of the new frame, which changes due to the new engine".

There's a lot of work to do then. Have there been any problems with the new configuration? New frame, new engine, new electronics and also new riding, who debut in Moto2. A real first day of school.

"To be honest, we'd raced with the Honda engine for nine years and it was time for a change. Triumph's proposal was the best, also because it allowed us to have a new manufacturer in the paddock. The new engine is very modern, the only three-cylinder in the championship, and it has an incredible sound. Then there is the new Magneti Marelli ECU, which gives us a lot more possibilities. I think they've done an incredible job, because when you put a new engine and new electronics together, there can be a lot of defects to work out. But we had no issues during the three-day tests. The biggest problem was the weather".

"They will have to work hard, but I've spoken to them both at length and they had a lot of fun on the bike. Marco and Philipp are both talented and the rain didn't help them during this first test, it would have better to have more dry track time. But I like their approach and am confident that they can do well already in their first season in the category. It's all new for everyone after all".

Do you think the formula is the right one, that these changes can bring new lifeblood to the category?

"I believe it can be a success. All the riders had fun during testing. There is more power, more acceleration and a gearbox that works perfectly. That was a weak point with the previous engine. I think that almost all track records will be beaten in 2019. I also think the races will be spectacular and then there is the new sound. Music to the fans' ears".

So performance will be closer to that of the MotoGP?

"We will be closer to the MotoGP bikes, but they are a lot more developed in terms of the bike and tyres, everything. If we look closely, the difference between Moto2 and MotoGP, at certain tracks, wasn't that big in 2018. In the end, I don't think that's important, what's important is what we saw in testing at Valencia".

You mean the Rookies in MotoGP?

"Yes, exactly. We saw that Mir was fast, as were Quartararo and Bagnaia. We know that the Moto2 works well in terms of preparing the fastest guys for the move to MotoGP.  This was already the case with the old Honda engine and now, with the new engine, I think it will be even more true. It's not only more powerful, but it teaches us how to work with more advanced electronics". 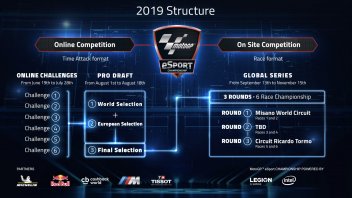 Dorna signed from 2022 to 2026. The Ricardo Tormo circuit will alternate with the others on the Iberian peninsula but will remain the last race of the year.
16 hours 3 min ago

KTM's sports manager at the gates of 2020: "This is the highest point of engineering applied to motorcycling and has taught us to go beyond our limits"
2 days 16 hours ago

VIDEO - A challenge of reflexes between Red Bull Motorsport athletes, with Verstappen, Gasly, Albon and Kvyat who challenged Pol Espargarò
3 days 11 hours ago