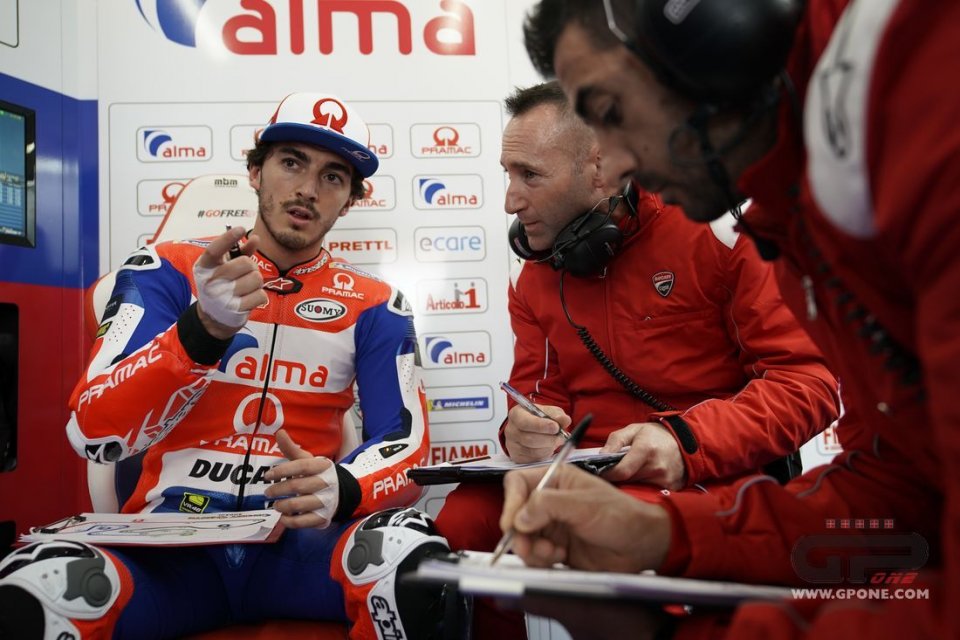 The first two days on the team Pramac Ducati have been more than satisfying for Pecco Bagnaia. Firstly, he takes home the (virtual) prize for best rookie, closing just six tenths from the front, and then he even made his first pass on Lorenzo, who he came across on track this morning.

“Passing Jorge was something incredible - he comments - Before getting close, I hadn't realised it was him, I thought it was Oliveira, so when I found him in front of me....His riding style left me open-mouthed, and then the same thing happened in the afternoon with Dovizioso. By following them even for just a short while, I've already found a new path to follow”.

Did you take particularly care when passing him…
“I'm still getting to grips with the MotoGP, particularly in the braking phase which is very different to what I was used to in Moto2. This is what I focused on today and I'm pleased because I was already able to improve in the final braking phase”.

What are you most pleased about at the end of this test?
“i definitely didn't expect to finish the test less than a second from the front, and today the gap was just six tenths. But the thing I like most is the feeling I had riding, I haven't found anything that is worse than Moto2, it's all better”.

You also attempted your first ‘time attack’…
“Yes, but to be quick on the flying lap is very different here with respect to Moto2. I didn't do too badly though. I know I still have a lot to learn, but for now I'm pleased and satisfied”.

What's the next step in terms of the Jerez test?
“To learn to manage the brakes better, today I had more confidence in braking but still not enough. We're on the right path, I don't want to put pressure on myself and just have to focus on improving and understanding more and more”.