Chaz Davies is finally about to take to the track with the Ducati V4-R. The two-day test at Aragon gets underway today, at 10am local time. As the Welshman prepares to start work, here are the first images of the Borgo Panigale four-cylinder inside the Aruba garage.

As you can see from the image, the V4 will be in action with a carbon coloured fairing, with no graphics. The definitive livery will not be unveiled until Phillip Island, at the official test that immediately precedes the race. Davies is the only Aruba rider to be testing at Motorland this week, in that Alvaro Bautista is competing in the final round of the MotoGP championship at Valencia.

Alongside Ducati, Kawasaki is also out on track in Spain this week, with new-entry Leon Haslam and four-time champion Johnny Rea. The Cannibal is keen to get started: “I'm excited about the Aragon test, we have various new things to test and it will be important to be consistent in our work. These first exits will help us to understand how the ZX-10RR will behave in light of the engine and frame updates at each track where we test”.

Also on track at Motorland is Yamaha, with riders Alex Lowes and Michael van der Mark, while the other Yamaha outfit, team GRT, will not test with Marco Melandri and Sandro Cortese until the end of the month. 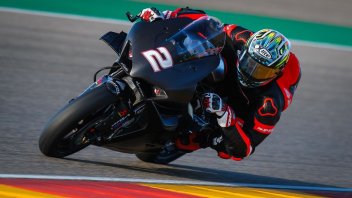 It was decided by the Board of Directors via video conference call. Previously the FIM-Dorna contract provided for a minimum of 13 Grand Prix. In F.1...
1 day 10 hours ago

An embarrassing moment for Audi Formula E driver Daniel Abt who, during the virtual race in Berlin, had an eSports professional race in his place:...
2 days 4 hours ago

Rainey: "With the way things are in California right now, there is no way we can race with spectators at Laguna Seca in July ". The series is set to...
4 days 12 hours ago

The round scheduled for the Circuito do Estoril from the 4th-5th July would go ahead as planned and become the season opener, to be followed by the...
1 week 17 hours ago