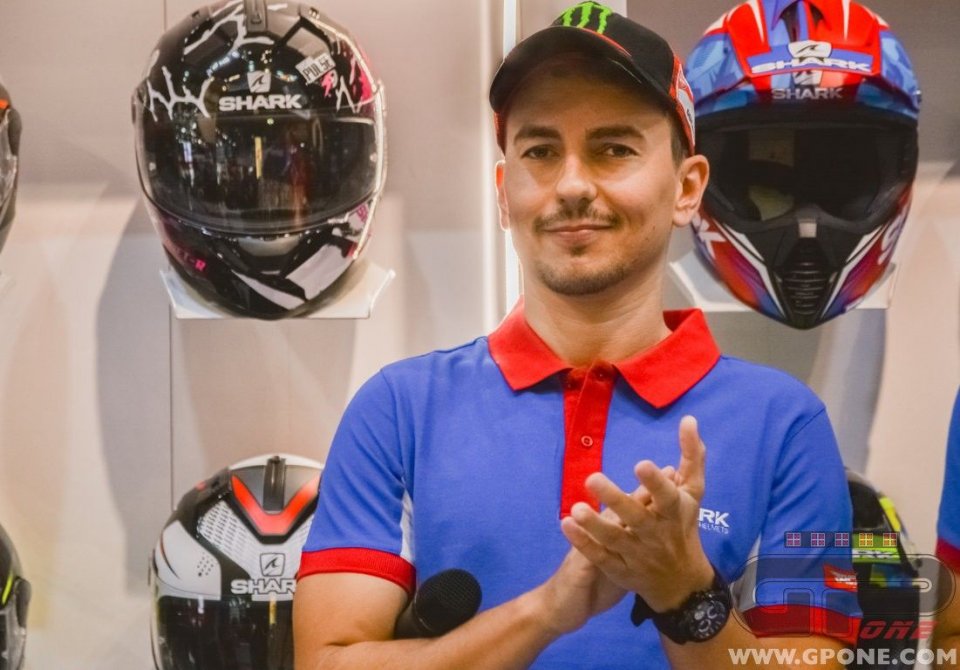 As soon as the Sepang weekend was done and dusted, he took the first flight out to Italy, where he was a guest at the EICMA show in Milan on Tuesday and Wednesday. Having admired the latest Borgo Panigale creations before heading to San Siro Tuesday evening to watch the Barcelona-Inter game, Jorge Lorenzo took time out to visit the Shark stand, the firm having taken care of his helmet since 2016.

This was the final stop for the Majorcan before heading home. Lorenzo's mind is already on the final round of the championship, though his fitness levels remain to be seen.

“I'll be at Valencia, because I'll be in good enough shape to take part in the race. I don't know what my level will be, I guess 80 or 90 %. unfortunately I was unlucky to get injured at the worst moment, with all the back to back races. As if that wasn't enough, a torn ligament then complicated things. It's a significant problem, because it's put under great pressure on the handlebars”.

Yet you still tried to grid your teeth and compete in the triple-header.

“Motegi was impossible, perhaps I could have done it in Malaysia, but I would have been fighting at the back of the field. In ten days, I'll be on track at Valencia, I don't think I can fight for a win, or even a podium, but I will push for a positive result".

At Valencia your Ducati adventure will reach its conclusion and you'll start over with Honda. Are you more emotional now or two years ago, when starting out with the red bike?

“When I arrived in Ducati, the bike was starting to be strong, but the project was still in its early days, the team having won two races. In Honda I'm starting with the current world champion. I'm very curious to see how this adventure goes, but for now my mind is focused on my last race with the GP18, as I want to finish in the best possible way”.

In Honda you will be alongside a champion. Can the fact you shared a garage with Valentino Rossi be of help with this?

“Rather than being in the same garage, when I arrived in Yamaha with Rossi I was under a lot of pressure. I consider sharing a garage with Valentino a positive though, because I was able to learn a lot from him and I think it will be the same with Marc. Having said that, I'm also sure that Marquez will learn from me too, like in terms of the telemetry or my way of working, despite the fact that I don't know the Honda yet”.

The numbers and results make it look as if the Honda is tailor made for Marc Marquez. Is that the case?

“I'm a big motorcycle fan, over the years I've watched a lot of videos and read many papers and magazines. When Lawson left Yamaha for Honda, everyone thought it was impossible for him to win with such an aggressive bike. But he was able to make it more clean in style, and went on to win the championship”.

Lorenzo is keeping his feet firmly on the ground though.

“Of course I'm not saying that I'm going to win the title with the Honda in my first year, as that would take a miracle. What I can say is that I will do all I can to be fast with the new bike, in that a strong rider is fast on any bike”.

One final thing - what would you give up if you could beat Marquez in the first race in Qatar?

“Nothing. I know it will be almost impossible, even if miracles and unexpected things can sometimes happen. I'll start out on this adventure with humility and a desire to work, aware that it will be hard to be strong. It's more likely that I will struggle at Losail, not only for the win but also to reach the podium or the top five. But as I've said I'll do my very best”.