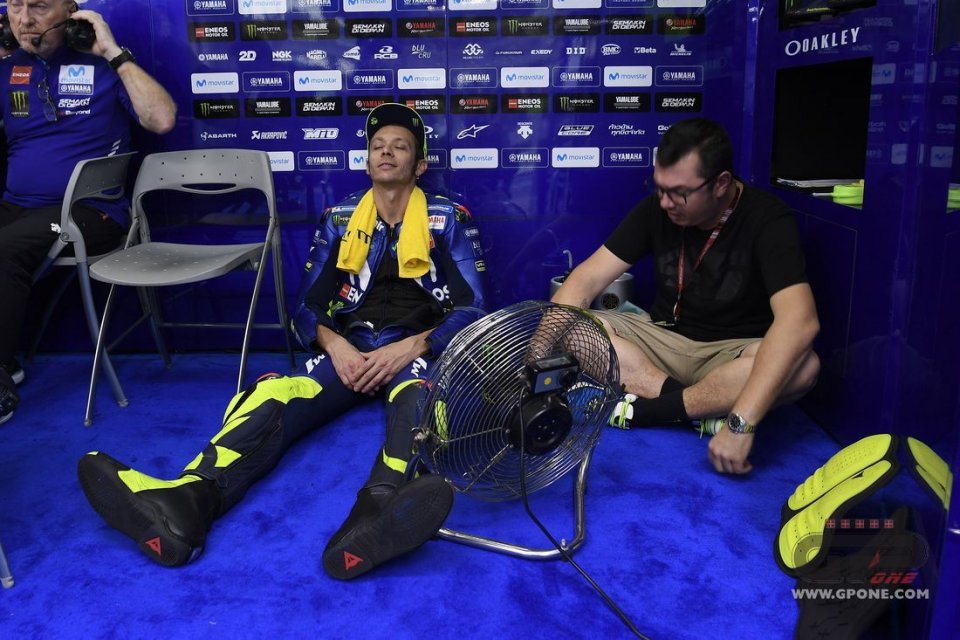 A front row spot is a strong and natural anti-depressant. Valentino is enjoying all the benefits and he jokes about the storm that delayed the qualifiers by an hour and a half and which didn’t even let him change clothes before the press conference. “It feels like I’ve had these leathers on since this morning. You know what I’ll do? I’ll keep it on for bed, that way tomorrow morning I’ll already be ready and save time” he laughed.

His sense of humour did not spare the decision, with which he agrees, to move the race up by two hours.

“Waiting until 3 would not have been very smart - he said - By doing that, there would have been a risk of moving it to Monday and then maybe Tuesday… we’ve been on the road for three weeks and I’m almost out of toothpaste. If I stay in Malaysia another day, I’ll be in trouble.”

The Doctor then turned serious and approved the decision.

“It is a smart decision because we’ll have more of a chance of finding the track dry, but especially to race - he explained – Already today in the garage we were worried that the qualifiers would be cancelled and with my time in free practice I would have started 9th. The front row is much better.”

That was not the only good news for Rossi in the Sepang rain.

“The wet with the M1 last year was a real nightmare. Stuff that would make you pull back the blinds in the morning slowly for fear of the rain - he joked - This year, on the other hand, I can ride well with the bike. With the medium tyre on the rear, I probably could have been faster, but at the end of the day, it’s fine just the same.”

So much that Valentino appears to be more competitive in the rain.

“Maybe that is the case, but in any case, I prefer a race on dry asphalt - he stated - Yesterday I was fast, whereas today I focused more than anything on using used tyres. I didn’t do badly, but Márquez and Viñales are even faster, so we will need to improve the bike even more before the race.”

“He’ll be in the mix too, but today with used tyres, I saw Marc and Maverick as being faster. However, he may have been working on something else” he reflected.

His final comments were on the challenge in Moto3 between Bezzecchi and Martin.

“They both deserve to battle for the title because they are consistently the fastest. As they say, may the best man win - he said - As I have already said, Marco really surprised me and just think that when we had him at the Academy, everyone said that he was weaker than Di Giannantonio, who he battled with in CIV. I think that the improvements this season were more than anything to his credit. When all the KTM riders were frustrated this winter with the performance of the bike, he did not give up and always demonstrated that he was competitive. I think that he has grown a lot, especially from a mental point of view.”

Yamaha hasn’t yet figured out the M1 engine's problems, but Franco in Brno mounted his last available one, Rossi and Quartarato at their 4th
43 min 57 sec ago

Marco finished Race 1 in 17th position in Portimao: "I couldn't stop the bike, I have to try to keep my morale high."
6 hours 9 min ago

1-2 for the new CBR with his brother Glenn, third Brookes on the Ducati, technical problems for Barbera. Tomorrow more of the same with Race 2 and...
17 hours 43 min ago

The German rider is better even though he has suffered a major trauma, fortunately without suffering neurological complications. He will be operated...
18 hours 13 sec ago

The American sets second pole of the season ahead of Lowes. 10th Marini, 21st the leader Nagashima
23 hours 15 min ago