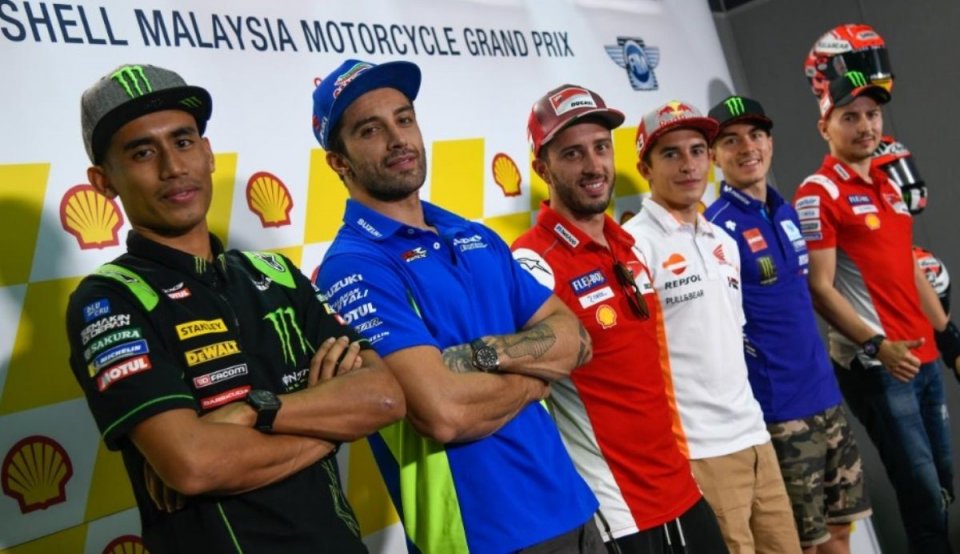 Thursday's press conference opens the Sepang race weekend. The first to speak is Marc Marquez, following his DNF at Phillip Island: “If you were to tell me that I can win the title at Motegi again in the future to then retire from the Australian race, I'd agree to that. It was a pity though as I had good race pace that day”.

The situation with Zarco is already resolved: “Both Johann and I were very unlucky, maybe he didn't brake at the right moment, while I was on the left, there was also a strong wind and perhaps my slipstream sucked him in. Zarco said sorry, but like I said it was just a racing incident”.

The Frenchman's crash remains a hot topic: “What happened to Johann reminded me of my crash at Mugello. i jumped off the bike as soon as I saw the wall and luckily the grass softened the blow. In Australia, the carbon fiber at the rear alleviated the impact but my seat was broken and so I had to retire. These are the risks of motorcycling, it happens in Moto3 sometimes but the bikes there are much lighter. Lasy year, we were all excited to battle at Phillip Island, but this confirms the dangers of our sport”.

Marc's attention turns to Bautista's performance in Australia: “The last race confirmed that Alvaro is a strong rider. When you join a factory team, as well as a competitive bike and many engineers to support you, you also have a morale boosts. Dovi is one example, following his results in recent years. This means we need to recharge the batteries”.

The #93 rider's focus in now on the Sepang race: “We've always been competitive at Sepang, but now conditions are different to how they were in testing. This isn't one of our best tracks, but the same applied to Motegi and we managed to win. We'll aim to stay inside the top five and fight for the win”.