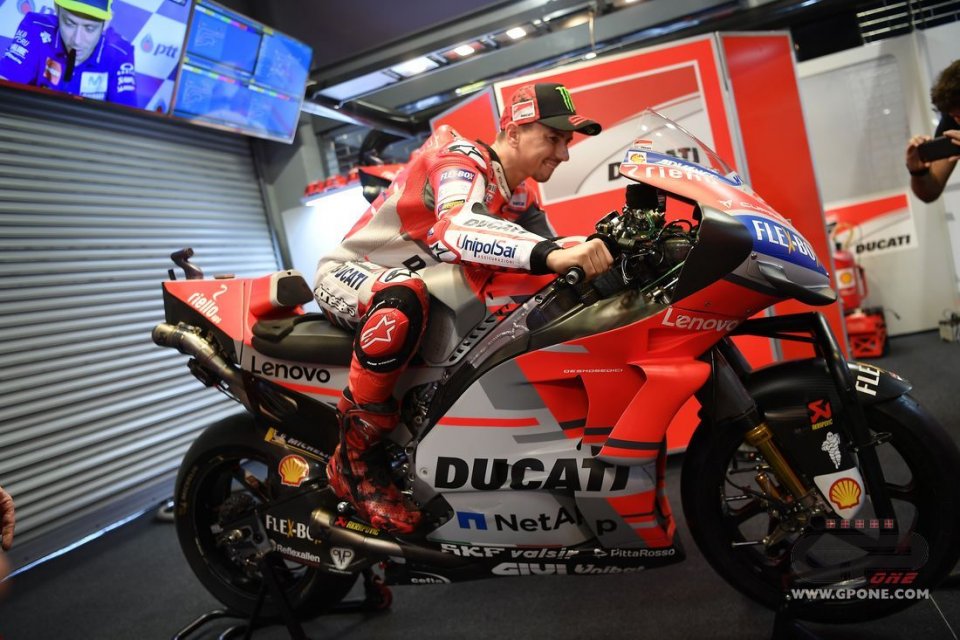 Lorenzo is already in Malaysia and is ready to get back on his Ducati. Having been forced to miss both the Japanese and Australian rounds after having surgery on his left wrist, injured at Buriram, Jorge hopes to compete at the final two events before bidding the red bike farewell.

First, he will need to see Sepang circuit doctors and receive their OK to compete, after which he will be able to assess his condition on the bike. The Majorcan has been unable to train in recent weeks, let alone try to ride.

“Only eight days have passed since I had an operation on the ligament of my left wrist, but I’m feeling a bit better - he comments - For sure the operation was quite recent and so we’ll have to wait until I get on the bike to see how the wrist responds and if I still have a lot of pain when I ride."

He'll have to wait until Friday's free practice to find out. Michele Pirro is also on hand in Malaysia though, ready to step in if Jorge is unable to race.

“On Thursday I’ll go to the circuit medical staff for a check-up on my condition and I hope to be able to race even though I won’t be at 100% - continues the Majorcan - I haven’t been able to train for the past few days and the Sepang circuit is very challenging, so this is not exactly an ideal scenario to return to the track.”

A pity, because the Ducati has proved quick at Sepang. The last two editions have been won by Dovizioso, Jorge finishing right behind him in second place last year. They have what they need to do well.

Andrea has no doubts about his goal: “Our main aim now is to try and win in Malaysia and for sure we can be competitive at Sepang."

Yet Dovi is taking nothing for granted.

“Things are different than last year for many reasons. The fight for second place in the championship is now becoming interesting, because Rossi is still not far behind me, even though in Australia I gained a few points on him, so we must remain focused because this is a track where he has always gone well.”

In Race 2 the domination of the Irwin brothers with Honda Racing UK continued. Ducati returns to success with Bridewell in Race 3. Controversy in the...
3 hours 1 min ago

"You can't think of the championship when you finish 14th, but I’m not putting myself down too much. The tyres are all round and black, but today...
16 hours 4 min ago

Yamaha hasn’t yet figured out the M1 engine's problems, but Franco in Brno mounted his last available one, Rossi and Quartarato at their 4th
22 hours 25 min ago