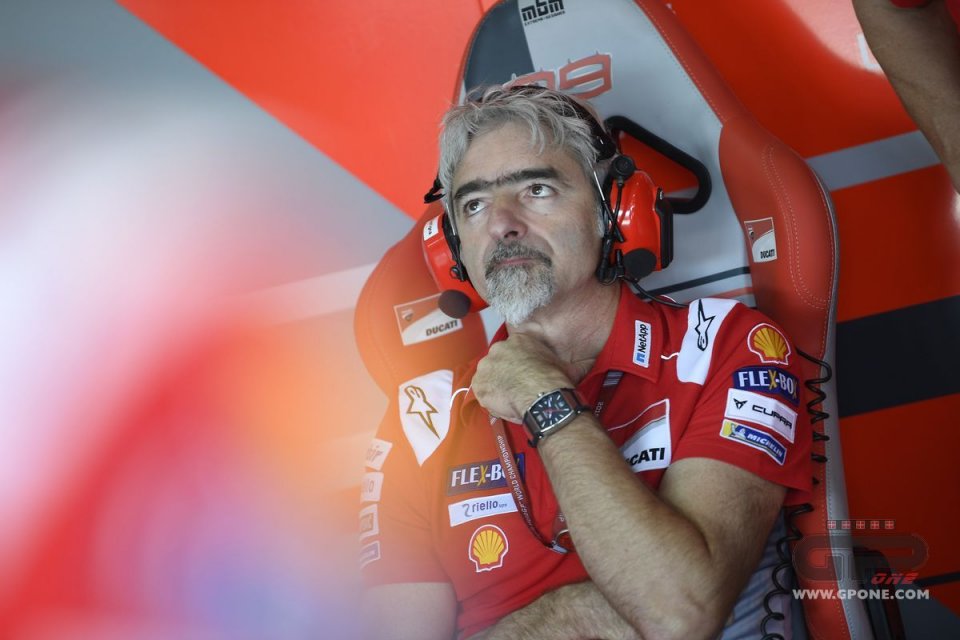 A designer doesn't just live off wins and title fights. Someone like engineer Dall'Igna, who has been fighting for the title with Andrea Dovizioso for two years against a superlative Marc Marquez also has to think about the future.

About the MotoGP that he would love if his hands weren't tied by increasingly restrictive regulations that put the brakes on his intelligence.

Here General Gigi speaks freely about his dreams: a more intelligent bike than the current one, in order to obtain a machine that is not only faster, but particularly safer for sports use on the road.

So with electronics applied to the dynamic parts, or rather the suspension and brakes. Because it is absurd to promote 'Cornering ABS'  on the production Panigale and then not be able to develop it in competition.

With one eye on the upcoming talent of course, the reason why Dall'Igna would like to see Ducati in Moto3, something that for now is simply a hypothesis but that would prove strategic in the future.

What's brewing in the immediate future, with the future GP19, and what freedom would you like as an engineer.

THE DREAM: ACTIVE SUSPENSION - "We have ideas to improve the bike, things we'll try out between now and the Qatar tests. I need to find a way to improve the bike mid-corner, still an area in which we need to work. Throughout my career, I've never looked for excuses, I've never said we haven't won because of a rider or a technician. I have to do all I can with what I have and everyone around me must do the same, riders included. As an engineer, but also with a view to the production bikes, I think that if it weren't for budget constraints, we should work on the electronics, suspension and braking system. So the ABS and active suspension. This kind of work could increase both the performance and particularly the safety of the bike".

Are you sure about focusing all your efforts on Dovizioso? Many think that the fight for Marquez for 2021 will soon begin.

MARQUEZ 2021? FOR NOW DOVI 2020, THEN WE'LL SEE' - "We need to bear in mind that I don't know what Andrea will want to do at the end of this contract. It's only human to think that sooner or later he'll want to do something else. There is only one Valentino, who will still be racing at 41. He's doing something extraordinary for his age, still keeping up with the current MotoGP level. It's too soon to think about what Ducati will do when Dovizioso's contract expires. I think it's better to focus on other things".

Do you have other desires, aside from winning the MotoGP championship?

DUCATI IN MOTO3: IT'S STRATEGIC - "Both I and Ducati owe a great deal to SBK and I'd like that series to shine as it used to. But we also need to acknowledge that what we experienced in the past was something of an anomaly. No motorsport has two similar high-level championships. Even if something changes, it will be tough to get back to the SBK of the past. I'd also like to design a desmodromic Moto3 bike. I think it's of strategic importance to Ducati".