Not one, but two Yamahas on the front row at Phillip Island. The best is the one ridden by Maverick Viñales, who will start alongside Marc Márquez tomorrow. The rider representing the manufacturer from Iwata therefore confirms his confidence on the Australian track after playing a key role on Friday.

“They were demanding qualifiers – Maverick began – On the first sector it was raining, whereas on the others it was dry, so it was not at all simple. Anyway, I am pleased with the performance and aware of what our potential is.”

So, the Spaniard’s expression betrays confidence.

“I am happy to be on the front row and this confirms our potential – he reiterated – Rear tyre choice will definitely be fundamental.”

Viñales pulls no punches with his prediction for the race.

“I’d say that there are four very fast riders with the right potential. Iannone is the one with the best pace, but I feel good and the sensations are right. Among other things, in FP4 I managed to be competitive even with the tyre that I liked the least.”

Besides the track, he is also looking to the future, namely the 2019 edition of the Grand Prix of Australia.

“Holding the race an hour earlier would be better – Maverick commented – It would definitely still be complicated because of the temperatures and especially because of the weather, since we are racing during an unpredictable season.”

The final comment, on the other hand, is on the Martin-Bezzecchi head-to-head for the Moto3 title.

“Like them, I’ve also been in an identical situation. The mental approach is determining. If I had to bet, I’d say Jorge, since he is my friend.” 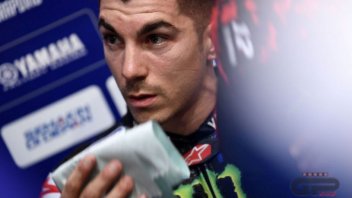 Vinales: “I want to demonstrate the real potential of the M1”

Forcada: "Will Rossi win again? Not a title, even a race is tough"
MotoGP
Moto2
Moto3
Sbk
MotoE
MotoAmerica

Financial problems forced him to reach this decision, despite having signed a contract with the Boe Skull Rider team in September.
2 hours 16 min ago

After winning the first instance of the trial brought by the two former custodians of the villa in Tavullia, the outcome has been reversed on appeal
2 days 7 hours ago

Spaniard, Italian and New Zealander set for induction into the Hall of Fame in 2020 Jorge in Jerez, Maz at Mugello and Hugh later in the year
3 days 6 hours ago

Last week a member of the MotoGP family lost his life.Here are the details of his funeral and a link to a memorial fundraising page in honour of Gary
5 days 49 min ago

The riders had complained about too many holes: new asphalt for Turns 1, 2, 9, and from 16 to 19, including the return straight.
6 days 5 hours ago