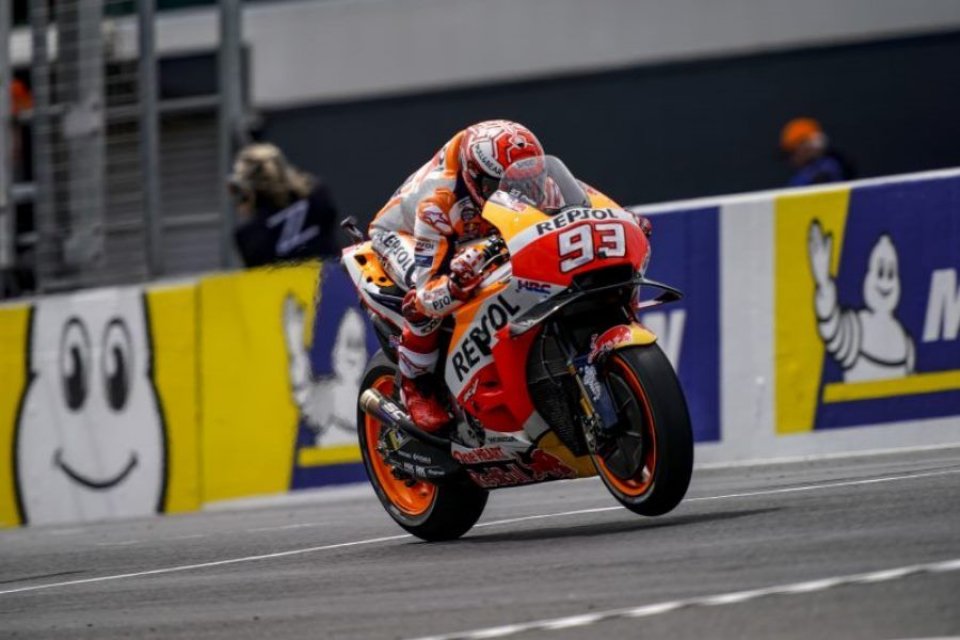 In Australia, the weather is unpredictable as always and, in the end, a few drops of rain made an appearance to kick off the MotoGP Q2 session. Just as the riders were headed out of pit lane on slicks, the weather played a nasty trick on them, making the asphalt slippery on Phillip Island.

However, it was an obstacle that could not stop Marc Márquez, simply phenomenal as he confirmed his status as king of qualifying, thanks to a time of 1’29”199. This gives the Spaniard 79 career pole positions, his 51st in the premiere category after Buriram a month ago. These are stats that highlight Magic Marc’s qualities on the flying lap.

Despite already winning the title, the Honda rider has no intention whatsoever of settling, sending an umpteenth message to the competition. With the world title already clinched, the spotlight for this season finale is on the battle for second, where Valentino Rossi (+1.071) is forced to chase the nine points that separate him from Andrea Dovizioso (+1.320).

For the two Italians, qualifying was an uphill battle, so much that they had to settle for seventh and ninth place with more than a one-second gap behind Márquez and his Honda. In fact, the two compatriots struggled with poor confidence on the slippery asphalt to the point of having to throw in the towel. However, don’t count them out as contenders for the win, especially the Doctor, who made an extraordinary comeback two years ago all the way to a second-place finish after starting from the fifteenth spot on the grid.

And to think that for Yamaha, qualifying at Phillp Island had actually not been so disappointing. Indeed, because on the front row, the M1 machines ridden by Maverick Viñales (+0.310) and Johann Zarco (+0.506) stand out proudly. This is an encouraging sign for the Spaniard which confirms his competitiveness this weekend, as well as for the Frenchman, hungry for a rematch after missing the podium last year by a matter of thousandths.

Missing from the front row, on the other hand, was Andrea Iannone, forced to settle for fourth a half a second behind the leader (+0.513). It was a session of ups and downs for the Suzuki rider where he was unable to find the edge in the end to move up behind Márquez and his Honda. In any case, The Maniac’s pace is promising, even better than Marc’s in FP4. Behind him are Alex Rins and Jack Miller, whereas Danilo Petrucci is eighth. Alvaro Bautista is back in twelfth place ahead of Pol Espargaró’s KTM, both in Q2 after making it over the Q1 hurdle. Not going through to the second qualifying session was Franco Morbidelli, out by three tenths. 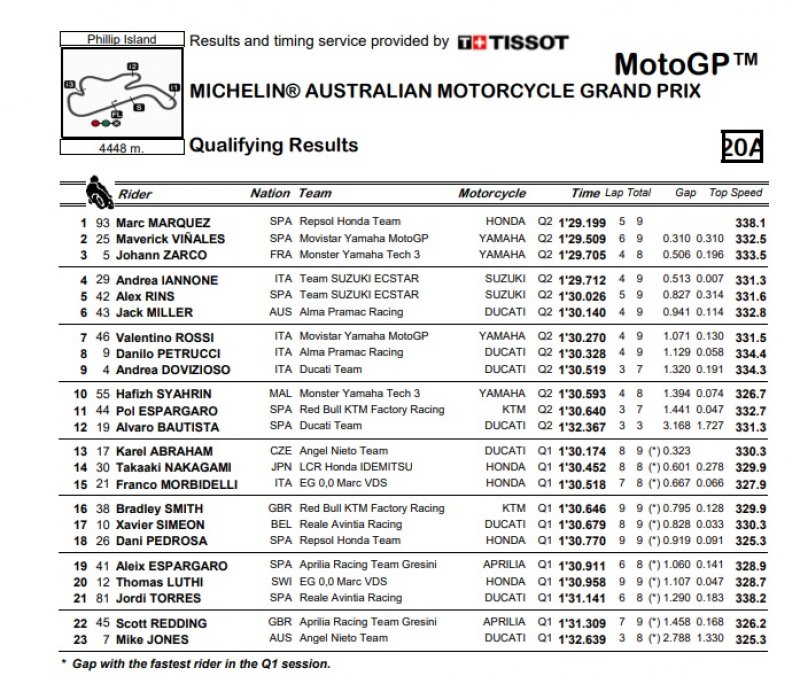