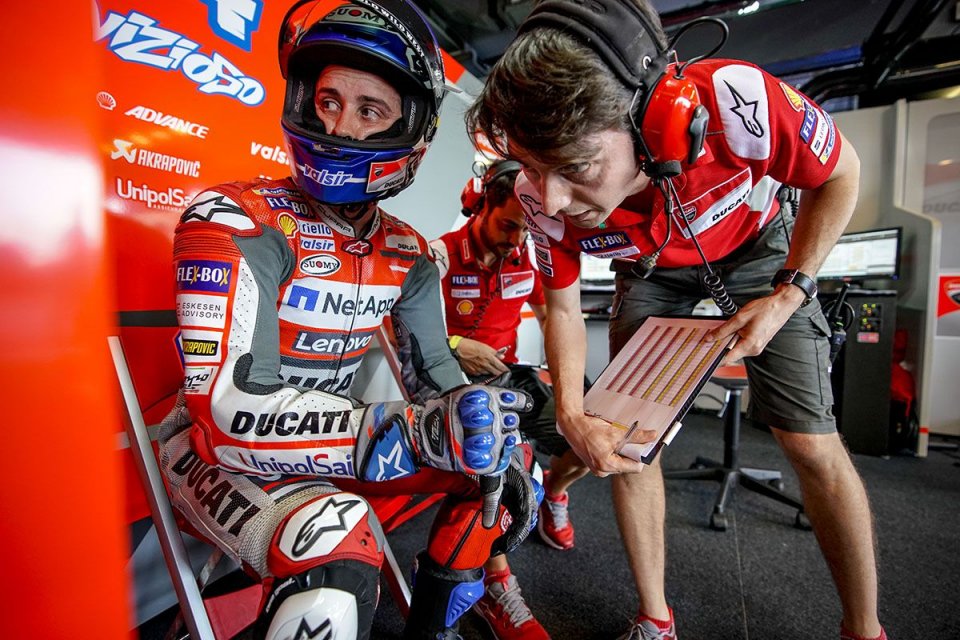 Andrea Dovizioso can be very pleased with his Friday at Motegi. The Ducati has confirmed it is the bike to beat at the Twin Ring, thanks to its innate stability through the hard braking points and the general balance of a bike that appears to have very few weak points

The Italian rider closed Friday in first place, despite having not ridden at all during FP2 due to the damp track conditions. Dovi chose not to take any risks, as did his rival Marquez, fourth.

What Dovizioso saw in FP1 has left him optimistic and he will do all he can to delay Marc Marquez's title celebration come Sunday.

"It went well, as we expected. This morning we did the opposite to everyone else, as we used the soft at the start and the medium tyre at the end, because we wanted to use the medium in the afternoon too. The base is very good, but there are some details to iron out. We'll see if the changes work tomorrow. I've seen that many riders can be fast here, so we need and want to improve".

Looking at today's performance, Marquez maintains that if you raced tomorrow, he'd be unable to stick with you until the last lap, do you agree?

"I don't know, perhaps there's some truth in it but not a lot. We're in line with the others, we haven't done anything exceptional. I don't know whether it's case of risking more or less for Marc, he'll try just as he always does. I don't know if he can try any harder. He's always at 100%! He'll be there with me on the last lap".

So you don't think Marc has ever dialed it down in order to limit the risk this season?

"Maybe he could have done more at Brno, I think that's the only race where he held something back".

Petrucci confesses that he's seen your data and that you change very little from track to track. Is this perhaps your secret?

"When you're going strong, you try not to change too much on the bike, because that's not what helps you makes the difference. In Thailand we made a change and then went backwards. The situation there was strange. When you find a certain base setting for the bike, you need only make small changes".

It looks like the weather might be better tomorrow. Do you already have an idea as to race tyres?

"Yes tomorrow will be better, cold but not wet. Despite the cold, we'll be able to work on certain things. The biggest limit is the tyres, because the time we usually have over a weekend is limited and now we've missed a session, but it's the same for everyone. You have to evaluate and decide which tyre to use for a long run, the medium or the soft. If it's cold, the tyre may well be the medium".

Lorenzo won't race but he could have been a frontrunner. Would it have been better to have him racing with you?

"It would probably have been better to have a fully-fit Lorenzo on track, perhaps he could have got between me and Marquez".

Do you see yourself as favourite, after day one?

"You can never make any predictions on a Friday, it's too early to talk about the race".