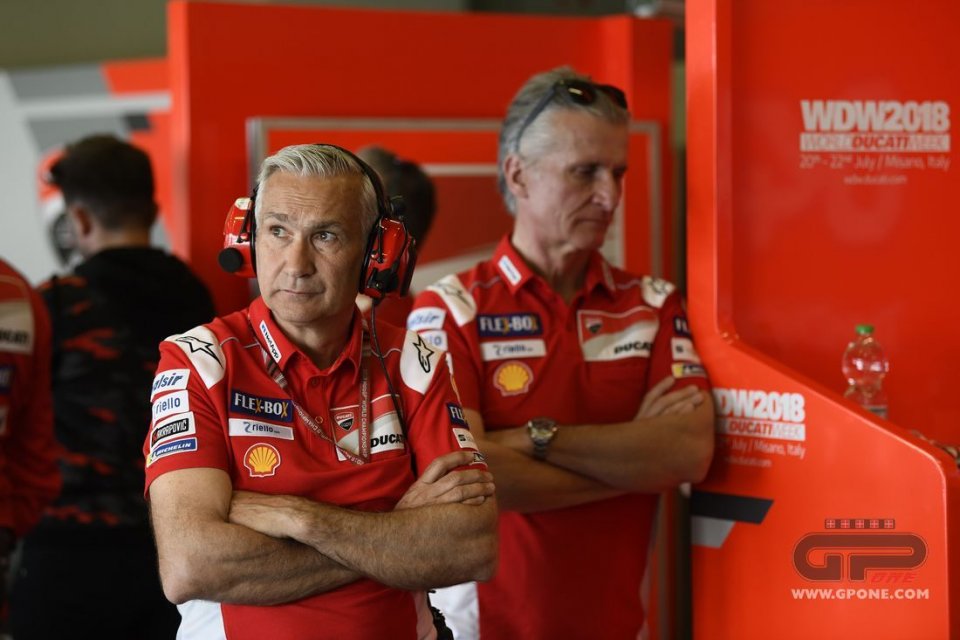 Despite Motegi being a Honda track, it appears to have been designed to suit the characteristics of the Ducati. It's no coincidence that the Desmosedici has been so successful in Japan in the past, and this weekend the red bike is set to ruin the party in Marquez's camp.

“It's a favourable track, for both the bike and riders- confirms team manager Davide Tardozzi in an interview with Corriere dello Sport - Lastly we seem to be fast everywhere and so, here too we can fight for the podium and even the win”.

“When you have Honda with Marquez and Yamaha with Rossi and Vinales to contend with, you need to be cautious."

Not many would bet on the M1, but Tardozzi sees things differently.

“Crisis? They'll quickly pull themselves out of it, perhaps they already have seeing they finished third and fourth in Thailand. Motegi is no too different to Buriram - here, like there, there are tight turns connected by straights. I'd think twice before stating that the Yamaha won't be competitive here with Rossi and Vinales".

Everyone's goal is to beat Marquez and Lucio Cecchinello admitted that he doesn't think anyone can do it right now.

“Dovizioso and Lorenzo have already beaten him - corrects the Ducati manager -  Marc is a great champion, but there are four or five riders who are able and capable of beating him, despite him being a phenomenon, the likes of which only come along once a decade. personally, I'm following a young guy who I think will have great chances in MotoGP, he's currently in Moto3. Who is it? I'm to saying, I don't want to publicise it or put any pressure on him, but I have confidence in him and think he'll get there”.

Tardozzi has an eye for certain things, but every rider knows how hard he'd have to work to dethrone Marquez . Some believe that Stoner could still do so.

“Casey was an absolute phenomenon. Despite riding just twice a year, six years after his retirement, he's proved recently that he can still set incredible lap times. He is an extraordinary natural talent. Marquez too, but the difference is that Marc nurtures his talent by training a great deal, Stoner did not”.

Marc's trademark are his incredible saves.

“What Marquez does with the bike is totally unique  - admits Tardozzi - No-one else has such incredible control that they can remain on board even after beginning to crash. And he has a real technique. If you re-watch the images, slowed down, you will see. In Malaysia, for example, during the 2017 test, I watched and re-watched the footage. He uses his elbow inside the turn as if it were a third wheel when the front wheel locks. He uses it to prevent the front from locking completely and he gets the bike upright again. This isn't something you can just think about and then do, it has to be instinctive. But for it to become such, he's studied himself”.

Not his only secret.

“Like many champions, he looks beyond tomorrow. Dovizioso too is looking far ahead. As does Lorenzo. Many riders have the defect of only thinking short-term. While riders like these three are able to program their future, the races, their training, change their style to suit requirements or bike evolution. They plan everything well ahead of time”.

“I've read about Marquez coming to Ducati. One who seems sure about it is Carlo Pernat. He's a great manager and a friend, but if you hazard one hundred guesses, it's inevitable that you'll get one right - jokes Tardozzi - Right now, we're not thinking about it at all. Our immediate future is with Dovizioso. We are also convinced that he will be bring the results we expect and so it's pointless talking about anyone else because Ducati's immediate future has a name, and that's Andrea Dovizioso”.

“The Formula 1 is a bigger organization. Everything happens faster, but the riders have the same attitude. Alonso returned here because he’s hungry...
20 hours 55 min ago