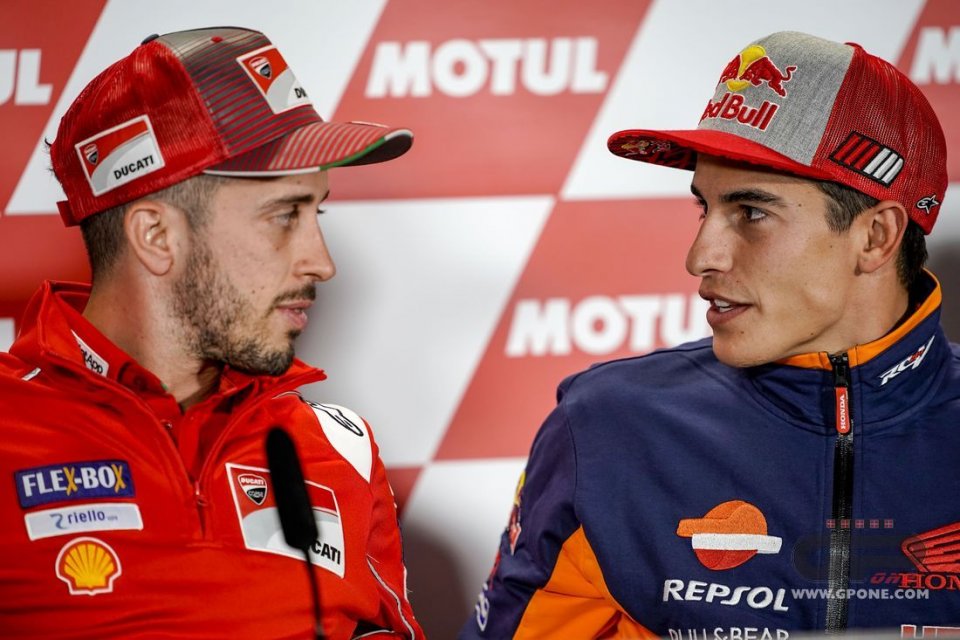 It may be just fantasy, but it's also an incredibly attractive idea, one that also appeals to at least some of the interested parties. So, as we wait to see whether the championship will be decided at Motegi, Andrea Dovizioso plays along with the hypothesis.

“Having Marquez in Ducati? It would be great - confirms the Italian - When you have a champion as a team-mate, as we do now with Lorenzo, you always learn something. Aside from personal relationship, it's great to be able to see his data, find out what he does on the bike. It's interesting”.

Tardozzi has nevertheless confirmed that you are the future for Ducati.
“That makes sense, we have two years ahead of use and are all focused on that. Important investments have been made and I'd be worried if he said different. It's no secret that everyone will try to hire Marc in the future. Ducati would be crazy not to try, but I don't think they are moving in that direction yet”.

Talking of the future, do you think you'll still want to race in two years' time?
“I'm very relaxed in this sense, more so than in the past. I'm not a rider who will continue on in MotoGP forever, I don't feel that need.  MotoGP is a dream for me and I'm happy, I want to win the title and I don't want to continue if I can't fight for certain results. When I am no longer able to do so, I won't continue to race for long. I might stop, or do another two years but, like I said, I'm not worried about it”.

Are you also relaxed ahead of the Motegi GP?
“I'm probably the favourite this time around. Others have been saying so for a few races, but only because it suits them (he laughs). Last year I won but we raced in the wet, but this doesn't take away from the fact that the track suits both my riding style and the Ducati”.

You may play a trick on Marquez…
“If I were to win it wouldn't change anything in terms of the championship, but it would be nice to delay Marc's celebration. This is Honda's home track though, so they will want to win, perhaps we'll see a good battle”.

Your last duel came just days ago, in Thailand, would you have done anything differently looking back?
“It's always easy to say so afterwards, but my mistake was in trying to immediately reply when he passed me at turn 5. I lost important metres there and was too far away from him at the last braking point”.

Your battles are becoming classics…
“Because we have different styles and approaches and this makes battling easier. I'm pleased that at 32 I can beat a 25-year old, I was able to bother him at Buriram at least”.

Does this make defeat any easier?
“We were strong at the end of 2017 but back then, the Marquez-Honda pairing was less competitive than it is now. I think there is now more substance to our results, so I'm optimistic as we look to the future”.

Will 2019 be the payback year?
“These are just words as I know that Marquez and Honda will remain the strongest. But they won't be the only ones fighting for the title”.

Among the other teams, Webike SRC Kawasaki France Trickstar (EWC champions) and Moto Ain (Superstock champions) will use the French tyres
1 day 13 hours ago

He tells of the horrendous crash in which he nearly lost his life and recounts tales of gangsters, glamour models and glory in one of the most...
1 day 21 hours ago

VIDEO - The two brothers will wear special graphics to show their solidarity at this time. Helmets, gloves and boots will then be auctioned off for...
2 days 18 hours ago

The Dutchman: "In the afternoon I had some problems with front end confidence"; Razgatlioglu: "Too many things to try confused me; my head is...
3 days 6 hours ago