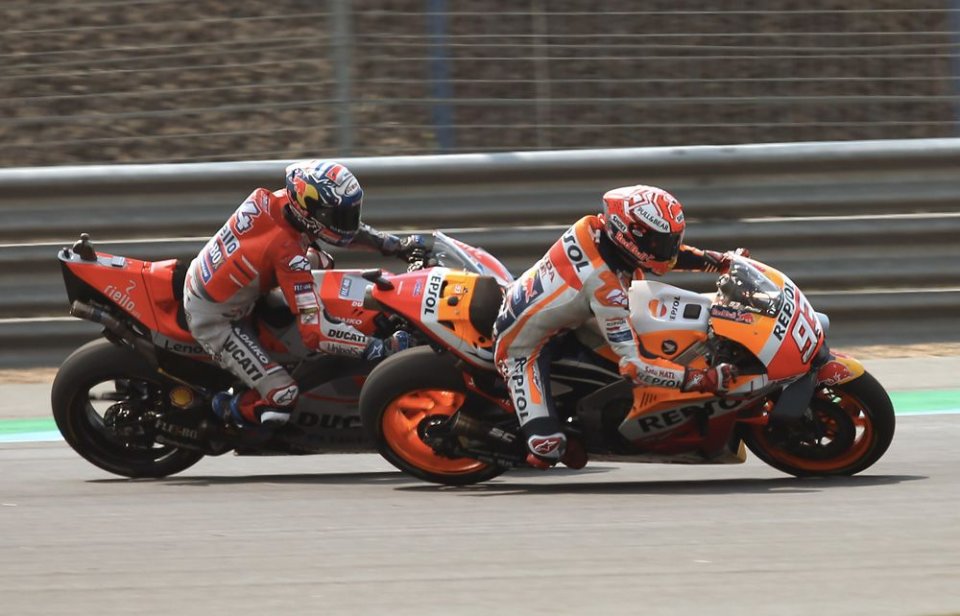 “On the fourth time, I managed to take my revenge”, Márquez flashes one of his best smiles to celebrate the Buriram victory. Especially because the win came beating out a Ducati on the last turn - Dovizioso’s. Usually, in that situation, it had been the Spaniard on the short end of the stick, but today he managed to invert roles.

“Today Andrea and I inverted roles. I played the part of Dovizioso and he played Márquez - he joked, commenting on the blows exchanged ahead of the finish line - I had actually thought of a different strategy. I wanted to push 10 or 8 laps from the end, but Andrea was fast, and I was unable to overtake him. I had overheated my front tyre.”

At that point, did you begin to think about the last turn?
“When I started the last lap, I did not have great confidence, because on those occasions I had always lost against the Ducatis. I had already tried to pass Andrea at that point and I realised that if I arrived behind him, he would beat me, so I tried to do what I had never done before:  arrive ahead on the last corner.”

Everything went according to plan…
“I knew that I could overtake Andrea on turn 5, but I hadn’t tried to do it before because Dovi is very smart and he would have closed the door on me. On the last lap, I forgot all about the championship and I gave it my all.”

By now, your battles are becoming classics, like those between Rainey and Schwantz…
“They are great battles, because we always go down to the last corner to decide them. There is respect between us, different styles and bikes and that gives us the opportunity to make a play in overtaking. I am more similar to Kevin because I always arrive at the braking point with the bike all over the place, but I would like to ride like Wayne (laughing).”

What do you mean?
“I don’t want to force braking. I would like to be more composed, but I have to do it because this weekend I was struggling coming out of corners. On this track, I was losing two tenths in the first sector, where there are two acceleration points. I wasn’t just losing against the Ducatis, but against the Yamahas too. We need to work on this aspect for next year and focus on the electronics. This weekend we had problems. Yesterday evening my team worked late into the evening. From the outside looking in, it all seems easy, but we actually work very hard.”

Do you see Dovizioso as your primary rival for next year too?
“Today he would have deserved the win. Andrea has had a good championship and he has done a good job with Ducati. They keep improving. At the season start he made some mistakes, but he is fast on all the tracks. Our goal is to improve the bike to try to gain an advantage in the race.”

In the meantime, at Motegi you’ll have your first chance to clinch the championship title…
“I have noticed that the Japanese part of the garage has been very motivated these last few days. They wanted to have the first match point in front of the big bosses. However, to beat Dovioso at Motegi we’ll need to improve in a few points or it will be impossible.”