Jorge Lorenzo won't ride his Ducati for the rest of the weekend. After yesterday's crash during FP2, he had already said it would be difficult to race and this morning he has announced that his Thai GP is over.

“Medical checks have identified a small fracture to my left radius and there's no point taking risks - he explained - I have to wear a rigid support to try and race in Japan and I know I won't be 100% but aside from that I'm OK. Like I've said, there's no point taking risks in my situation and even if I was fighting for the title it would have been hard for me to race, maybe I could have scored one or two points if I'd had some anti-inflammatories".

“To be honest, everything seemed too easy after the crash, the doctors said there were no fractures but I could feel something strange in my left wrist. So I wanted some additional checks. Today it hurts and I don't want to aggravate the situation”.

Lorenzo will stay in Buriram for the rest of the weekend and was already back in the garage for FP3. 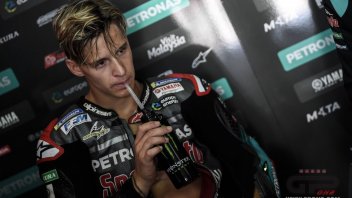 Quartararo: "I'll try the FP3 but without taking unnecessary risks....

VIDEO - A challenge of reflexes between Red Bull Motorsport athletes, with Verstappen, Gasly, Albon and Kvyat who challenged Pol Espargarò
2 hours 2 min ago

"When things are not going well, you can feel the weight of the name on your shoulders. My goal for 2020? Improve myself"
4 days 18 hours ago

Englishman suffered a fracture and dislocation of the right shoulder. The British rider suffered an injury during a fall at this week’s private test at the Jerez-Angel Nieto circuit
5 days 3 hours ago

The story starts on the Isle of Man in 1949, Harris has been at the centre of the sport for decades, getting to know the riders as individuals
5 days 5 hours ago

The FIM has published the updated entry list. Besides the reigning champion, Ferrari, we find De Angelis, Canepa, Casadei, Marcon, and Zaccone
6 days 19 hours ago

PHOTO. Tunnel tests on the GSX-RR to improve the bike's aerodynamics
6 days 21 hours ago

From 11 February at 9.00 a.m. until 21 February you can participate in the auction for the purchase of Fabio Quartararo's helmet on EBAY.
6 days 23 hours ago