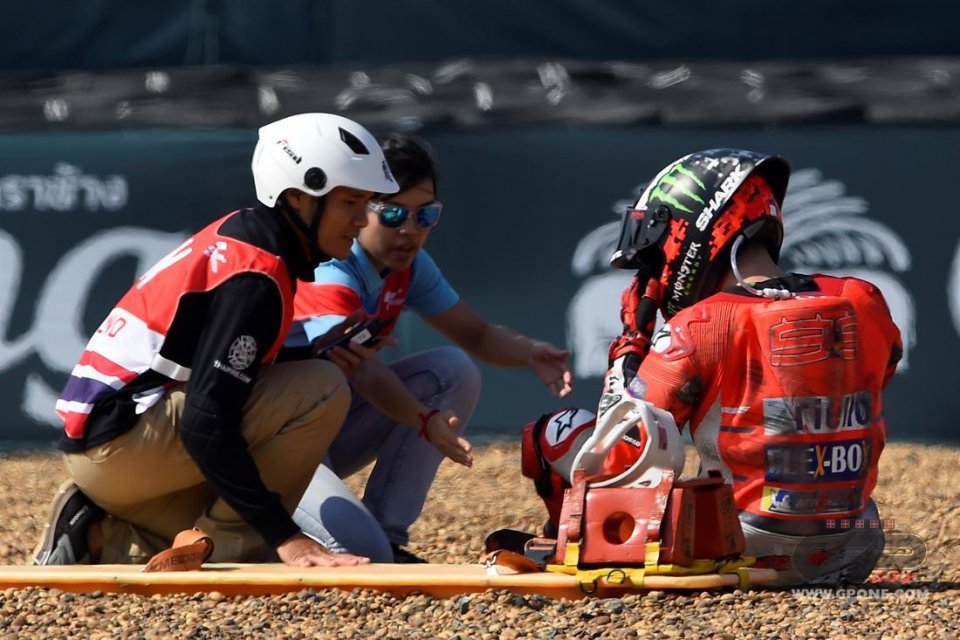 The three-day Thai weekend hasn't get off to the best start for Jorge Lorenzo. FP2 saw him suffer a violent high-side, which forced him to end his session prematurely.

Transported to the medical centre and then Buriram hospital, the Majorcan has not suffered any broken bones, bur rather contusions to his wrist and ankle, increasing his pain level following his previous Aragon crash. It is now know that a technical problem was to blame for the accident, and not the Spaniard himself.

“Knowing what's happened, I have to say that on the one hand I was unlucky with the crash, but on the other hand I'm lucky it wasn't worse. I'm relieved because I was worried that the problem with my foot - after the Aragon crash - had caused the accident. But we now know it was a technical problem”.

The disappointment is clear to see on the #99 rider's face.

“A pity, because I was going strong and improving my feelings and my speed. Even if it's unlikely, I will try to ride on Saturday. I know it will be tough though, as I'm worse now than I was this morning”.

The Majorcan's attention turns to the technical issue.

“I've spoken to Gigi and they know what happened. The team knows what to do in future. I'm relaxed because we'll make changes so that it does not happen again”.

Moriwaki won the inaugural Moto2 world championship with Toni Elias: "Toni won riding the MD600, one of the best achievements in Moriwaki's history,...
21 hours 59 min ago