Marco Melandri left us with something of a mystery on our hands yesterday. At the end of an interview with us, he revealed he has the possibility of riding a Ducati or a BMW next year, but he wouldn't tell us which teams have contacted him.

As things stand, the most likely suspect is team Milwaukee, set to end its collaboration with Aprilia. The British team is not happy with the support it has received from Noale and is looking around for 2019. There are two options on the table, precisely those cited by Melandri: Ducati and BMW.

The team contacted Borgo Panigale a while ago, keen to know the costs involved in fielding two Panigale V4 bikes. Ducati would have no problems supplying the bikes, which would be identical to those ridden by Davies and Bautista, it being the four-cylinder bike's debut year. Ducati would need the OK by mid-October though, in order to produce the bikes in good time. In this case, Milwaukee would be treated similarly to how it has been by Aprilia, in that it would be a customer team.

With BMW, the situation would be slightly different, in that the British team could receive greater support (and therefore development during the season) from the German manufacturer.

Whatever its final decision, Marco Melandri could be one of the riders. The Italian has already competed with the BMW in Superbike, in 2012 and 2013, placing third and fourth overall at the end of those seasons.

And the second rider? There is no shortage of possible names, starting with Eugene Laverty and continuing with Xavi Fores and Lorenzo Savadori.

Ducati is also negotiating with another team with regard to the supply of a Panigale V4: Genesio Bevilacqua's Althea team. The Italian outfit has fielded the S1000RR for two seasons but is considering a move back to the Ducati. It would field just one rider, possible names precisely those cited above... 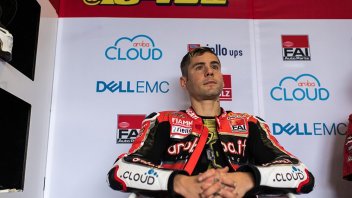 Dorna signed from 2022 to 2026. The Ricardo Tormo circuit will alternate with the others on the Iberian peninsula but will remain the last race of the year.
1 day 7 hours ago