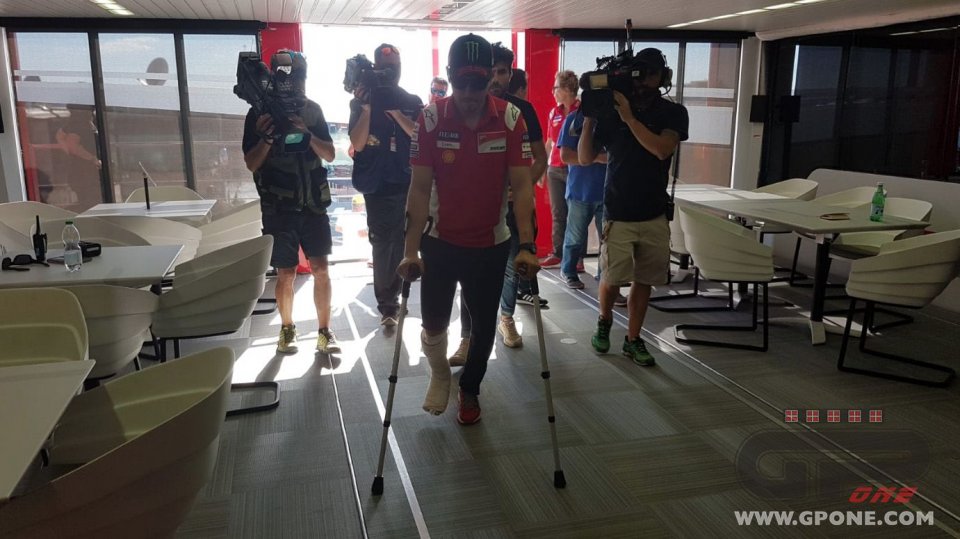 Jorge Lorenzo had a medical check-up in Barcelona yesterday, to evaluate his progress following his Aragon injury, the Majorcan left with a dislocated right big toe as well as a compound fracture of the second metatarsal.

Doctors saw him and took x-rays, the outcome of which appears encouraging.

Lorenzo has therefore decided to travel to Thailand to try and compete in the GP, taking place from 5-7 October. Only once he gets to Buriram and tries to ride his Ducati will Jorge know how bad the pain is and to what extent his foot injury limits him, and so only then will he be able to make a final decision as to his participation in the race.

"We tried the wet track last year; we need to be careful about the closeness of the barriers. We need to talk to Michelin to avoid the mistakes with...
1 day 3 hours ago

For the Austrian and Styrian Grand Prix, a new medical service for the riders is scheduled for the next two weeks
2 days 4 hours ago

Team manager Jansess: "it's still not exactly clear what's wrong with Jesko." Maybe he'll be able to race back to Misano
2 days 7 hours ago

The Covid-19 pandemic remains a source of concern in Japan. As a result of stronger restrictions on entry in Japan, international teams and riders...
2 days 11 hours ago

The former 350 world champion, official Yamaha and Honda rider, will take part in the 'Motegi Endurance Race' on 23 August riding a CBR250RR. '...
3 days 5 hours ago

After having made contact with Josh Brookes, the Race Direction decided to disqualify the Honda rider from Race 3. He'll be starting last at...
3 days 8 hours ago

The venue for the last Grand Prix of the 2020 season has been unveiled, and it'll take place on one of the most spectacular tracks in Europe. The...
3 days 11 hours ago