Three races without a win is not much of a fast for any rider, unless the man in question is called Marc Marquez. This is the Spaniard's longest losing streak this season, if we can call it that. Since returning from the summer break, the Ducatis have won all three of the GPs run and Marc has had to "settle" for two second places and a third. Enough to continue to increase his championship lead, with a 46-point lead (over Rossi) after Sachsenring and a 67-point lead as things stand right now (over Dovizioso).

While the red bikes are proving to be the ones to beat, Marquez continues to be the most consistent and best over race distance, able to make the difference with respect to his respective Honda colleagues. Despite the Spaniard appearing to have his 7th world championship well and truly in the bag, the final part of the season promises an all-out battle between Marc and the Ducati riders, Dovizioso and Lorenzo.

You don't have to know Marquez well to understand that he doesn't like to lose and will have no intention of settling. Especially at Aragon, a track at which he was won 3 of the last 5 races, a corner of said track to be dedicated to him this coming Thursday. The best way to celebrate this honour would be the top step of the rostrum, ducatisti depending.

In the red garage, an internal battle is keeping fans on the edge of their seats. Dovizioso wants to prove that he is no second rider and plans to do so by winning more races than his team-mate. Lorenzo, in turn, wants to demonstrate just how much his absence will be felt next year, his aim exactly the same as Andrea's.

Right now, Jorge and Andrea are tied, with 3 race wins apiece, but the duel will rage on until Valencia of course. The fact that the Desmosedici hasn't won at Motorland since Stoner's day counts for little, because this season the Italian and the Spaniard have already proved that the GP18 is the right bike with which to break certain taboos. Without forgetting the Majorcan's double in 2014 and 2015.

In addition, Ducati has the benefit of having tested at Aragon recently, while Honda was not present. Jorge and Dovi didn't just collate data and work on set-up ahead of the race, but they also both set record lap times.

The gauntlet has been thrown down, in Marquez's direction, with no obvious contenders outside of this trio. Yamaha is still struggling with a technical crisis that seems to know no end. The Misano race was one of the lowest points of the whole season and, best case scenario, Valentino and Vinales will play the role of outsiders.

Ducati and Honda are a step ahead of everybody right now, even Suzuki struggling to make up the lost ground, despite Rins not having done too badly at Misano.

The forecast promises sunny weather at Aragon, with Marquez, Dovizioso and Lorenzo set to raise temperatures even further, as they have often been known to do this season. 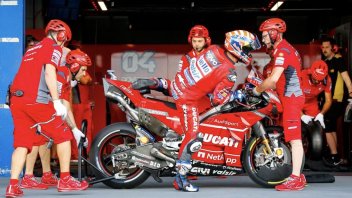 BMW riders want a lucky sticker to go on their bike for the next round! This competition is open to all BMW Motorrad WSBK fans aged between 5 and 11...
13 hours 42 min ago

REVISED CALENDAR - The 8 Hours of Suzuka is confirmed on 19th July, financial aid for private teams planned
1 day 20 hours ago

"I was slow last year, but now I have everything I need to stand out. I wanted to win in Qatar, but a fourth place means a lot to me."
5 days 12 hours ago

As the situation remains in a state of constant evolution, new dates for the French GP and the recently-postponed Gran Premio de España cannot be...
6 days 19 hours ago