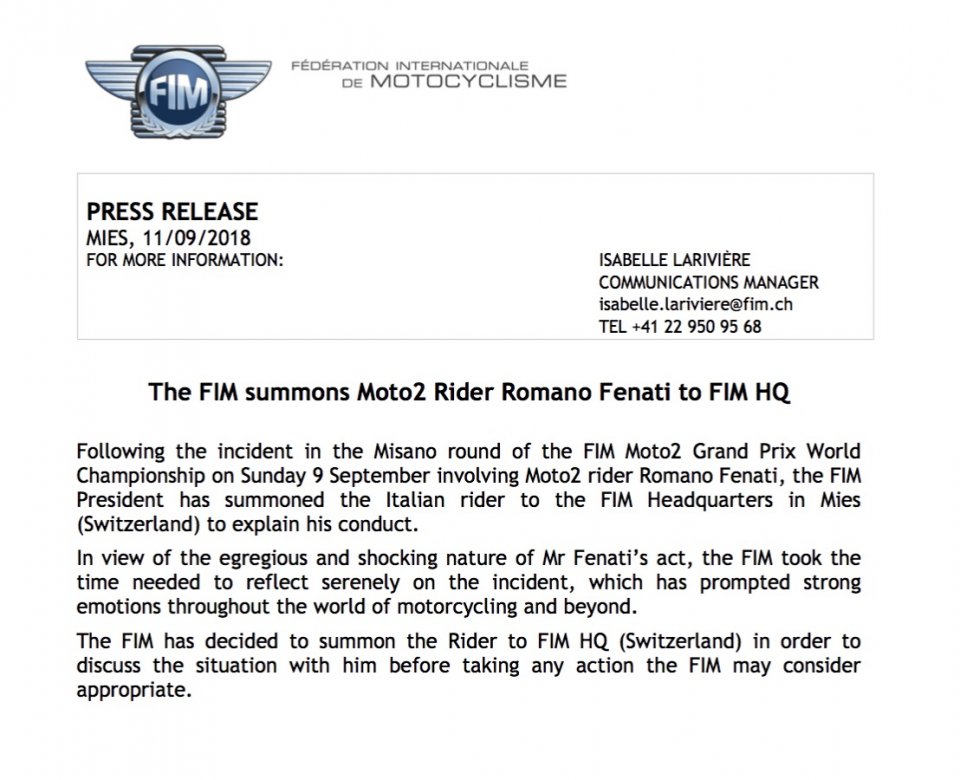 As received from the Federation:

Following the incident in the Misano round of the FIM Moto2 Grand Prix World Championship on Sunday 9 September involving Moto2 rider Romano Fenati, the FIM President has summoned the Italian rider to the FIM Headquarters in Mies (Switzerland) to explain his conduct.

In view of the egregious and shocking nature of Mr Fenati’s act, the FIM took the time needed to reflect serenely on the incident, which has prompted strong emotions throughout the world of motorcycling and beyond. The FIM has decided to summon the Rider to FIM HQ (Switzerland) in order to discuss the situation with him before taking any action the FIM may consider appropriate.

Dear Vito, I've read and re-read the release from the Federation, but despite my best efforts I cannot understand the meaning. Unless the spirit of Jean Marie Balestre, the authoritarian FIA President, is reincarnated in you.

We have both followed motorcycling and the world championship for years, so we both know that this is the first time that the FIM has publicly demonstrated its virility.

Finally! we should say. If it wasn't for the fact that there have been other episodes deserving of such an injection of testosterone. Maybe not many, but definitely a few, don't you think?

What happened in those other cases? Were you distracted? Did you overlook them? Was there no TV signal in Geneva? No Internet connection?

I'm curious. I'm a journalist after all. I have to be, my job requires it of me.

But I also congratulate you, because while many might forget it, you are a sportsman. And you had a father, Andreas, who, with Venemotos, brought us champions of the caliber of Johnny Cecotto and Carlos Lavado.

This means that I expect a decision, from the FIM and from you, that is harsh but fair regarding the Misano affair.

And, perhaps, a little penitence for all those decisions not taken in the past.