Carmelo Ezpeleta has undoubtedly come away from the traumatic experience of Silverstone with a lot of doubts and not a lot of certainty. Perhaps one of the things that he has learned, and one that will leave a mark, is that the riders are capable of deciding for themselves. It was clear already on Saturday that in case of rain, it would be very complicated to run the race, but what appeared equally clear was the fact that Dorna wanted the riders to race at all costs.

What with changes of schedule, delays, checks and meetings, the combination of the Silverstone asphalt and English rain left no way and, more significantly, brought the riders together for the first time in years.

The day after the debacle, the Dorna CEO responded to questions posed by Spanish website AS.com, confirming that the organisers did in fact want to race at all costs, even if it were on Monday.

“This Monday was a bank holiday in England, and I don't understand why most of the teams didn't want to race. When it began to rain after warm-up, we immediately proposed this solution, together with the organisers of the race. I didn't understand the refusal, but we respected the teams' decision. From there, we had continual postponements”.

According to the Dorna boss, conditions would have been prohibitive even later in the day, the decision of the riders in line with what the Safety Commission would have decided.

“When we saw that it would still be raining at 4pm, we already knew that we wouldn't be racing. The riders' meeting was unnecessary. With hindsight, we could have raced at the time set for warm-up, but when could we have decided and communicated that? At six in the morning? In any case, there wouldn't have been time for three warm-ups and three races”.

Ezpeleta reinforces the fact that the riders' standpoint was superfluous in this case.

“The best thing about the day was not the riders' show of unity, because we didn't need to be convinced about anything. We were already thinking the exact same thing”.

The Dorna CEO also confirms that said rider meeting came about spontaneously and was not officially arranged.

“The meeting came about because riders began to head to the IRTA truck. They called us and we participated. No-one called the meeting, it wasn't a Safety Commission meeting, but an impromptu thing, we were called and went along”.

Ezpeleta doesn't hesitate when it comes to placing the blame.

“The blame clearly lies with the firm that put down the new asphalt. The circuit was simply a victim of this failure, they ordered the new asphalt and the resurfacing was badly done”.

The problem that arose at Silverstone may serve as a lesson for Dorna, and the Spaniard confirms that things will change in the future.

“We have to evaluate whether to nominate someone to carry out checks when a circuit is resurfaced. To be clear, we'd need an asphalt expert who can evaluate the quality of the work. There is no set rule as to how surfacing should be done, not even the FIM has a ruling on this. There is only a regulation regarding the granularity and the incline, but it doesn't specify how much bitumen or binder should be used, because these values change for each track”.

Ezpeleta also stated that Silverstone is not off the calendar, but that changes must be made.

The Dorna number one concluded by stating that the real loss was not just of a financial nature.

“The real damage is of a moral nature. I think Silverstone will repay the fans in some way for the fact they didn't see anything and we definitely have to speak with certain sponsors and advertisers. But I prefer to have cancelled a race than have to regret an incident”. 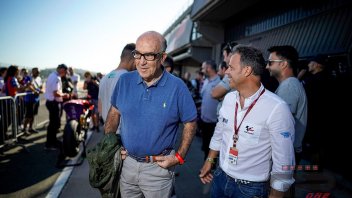 Ezpeleta: "The best riders will also emerge in the MotoE"

KTM's sports manager at the gates of 2020: "This is the highest point of engineering applied to motorcycling and has taught us to go beyond our limits"
1 day 8 hours ago

VIDEO - A challenge of reflexes between Red Bull Motorsport athletes, with Verstappen, Gasly, Albon and Kvyat who challenged Pol Espargarò
2 days 3 hours ago

Englishman suffered a fracture and dislocation of the right shoulder. The British rider suffered an injury during a fall at this week’s private test at the Jerez-Angel Nieto circuit
1 week 4 hours ago