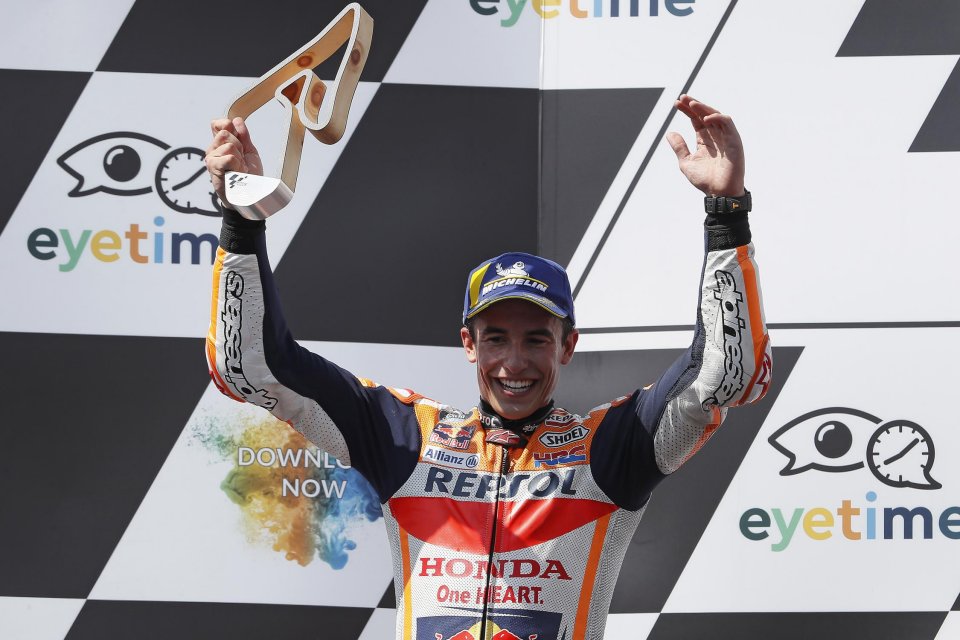 His adversary might change, but not the final outcome. The 'curse' of the Red Bull Ring continues for Marc Marquez who, just like last year, missed out on the win, forced to settle for second place by a Ducati rider. “Today I really tried to win, unlike the last race. I started to push straight away because my aim was to reach the end with only one Ducati to contend with. It worked, but I thought it would be Dovi rather than Jorge. I could see it would be hard to beat them due to their speed along the straight. I tried because I'm Marc but in the end I risked crashing at turn three, I had fun and have extended my lead over second”.

The Spaniard opted for the hard tyre, in a sea of indecision.

“It was difficult to select the tyre today, I was undecided between the medium and the hard and went for the second in order to be sure of getting to the end and to be able to push right away to build a small gap. Jorge did well but luckily I have a lot more points; he was braking hard but I was too, he had better acceleration. I tried to pass him at the only corner where I had a chance, but I wasn't able to.”

Marc has changed something on his Honda with respect to last year but, despite the improved sensations, he failed to score full marks.

“Last year I had a different setting but this year I felt better, I had two or three strong points but the Ducatis have grown in the third sector, where I made little difference this year. I couldn't pass, mainly due to lack of traction, at turns four and five for example”.

The duel with Lorenzo was a thriller, and will be next season too: “I made contact with Jorge but that's normal, that's racing. I'm pleased he won't be with Ducati next year, I won't have any excuses if we're on the same bike. Honda has gone well to get him, that way he cannot win with another bike".

The classification continues to smile on Marc, who awaits the right track at which to return to full-on attack mode.

“This year I've won at tracks like Le Mans and Jerez, where I usually struggle. I like Aragon for example but it depends on many things, in general it's important to be on the podium each week, it's better to lose five points and celebrate at the end of the year. We're definitely heading to some tracks where we should and can attack to win”.

Attention now turns to Silverstone: “Last year Dovi won but we'll see what the new asphalt is like on the tyres. The podium is always the goal, and then we have Aragon that I really like."

While Marquez can console himself with second place, Honda team-mate Pedrosa was pipped to the post by Valentino Rossi, to finish seventh.“Shortly after the start, I had contact with Miller and Aleix, but I avoided crashing by going wide, these things can happen, we were all very close there. Unfortunately I lost about six places though and then had to play catch up”.

“At the start I wasn't confident and was lacking grip, I struggled, but then things picked up and I was able to be strong at the end. I was fast i the final stages, trying to catch Rossi, but it wasn't possible”.

He too looks to the future.

“I don't know if we'll test at Misano (Yamaha and Ducati are confirmed), but we are heading to Silverstone next, not an easy track for me. So we'll see what the confidence levels and sensations are like with the new asphalt. My goal is to continue to work and finish the season strong”.