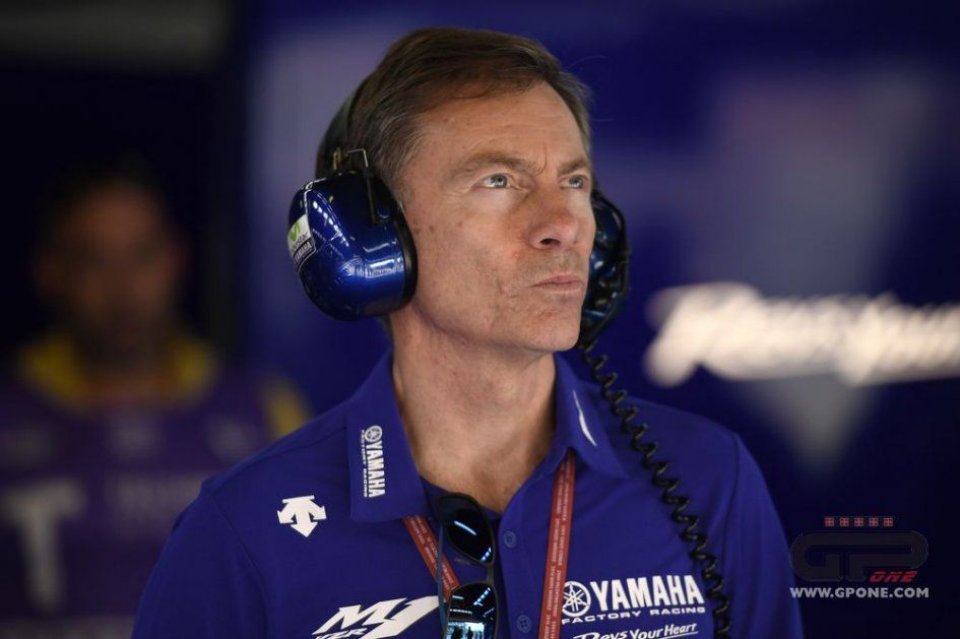 Closing the Grand Prix in sixth place, fourteen seconds from the winner, is definitely not among Yamaha's ambitions in MotoGP. Valentino Rossi made a good recovery but was unable to do more than sixth, with things even worse for Maverick Vinales, just twelfth across the line, 22 seconds behind Lorenzo.

Lin Jarvis was on hand to speak about this half disaster,  and didn't deny Yamaha's responsibility for the recent lack of performance by the two factory M1s. Speaking to Sky, his statements perfectly summed up the issues currently being faced by the Japanese manufacturer.

"It's clear we're in difficulty - Jarvis begins -  during yesterday's press conference, project leader Tsuya admitted that we are behind with our bike. I hope this is the worst moment of the season, yesterday's qualifying was a disaster and he accepted technical responsibility for this situation. It's a little tedious to continue hearing that our riders are complaining because they're not happy, and that they're waiting for evolutions that are still to arrive".

The manager believes that there is still a positive to come out of this GP,  though it only relates to Valentino Rossi. Vinales' situation is far from serene.

"We're working, today I was pleased with Vale's race, he came up from fourteenth to sixth place. We saw what a fantastic race Ducati and Honda ran, and we always want to compete with them, but right now that's impossible. On the other hand, today was a very tough day for Maverick, he definitely didn't run a stellar race. he had some issues at the start, as he often does, and wasn't able to do a lot better after that".

A Vinales who appears light years away from the man we saw in early 2017, as confirmed by Jarvis himself, although the Yamaha manager thinks that the Spanish rider's age and desire to fight at the front should also be taken into consideration.

"We need to better understand Maverick's situation. In 2017 he was very fast all winter, then he won three races, after which he was unable to get back to that level. He is very talented and wants to succeed, but he's still young. He needs to learn to mange not only the positive situations but also the tough ones. It's not easy this year, there are many strong riders and we're really struggling. We haven't won for more than a year and he's suffering. We also need to respect his young age, and his will. A different situation to that of Vale".

Returning to Tsuya's conference, and knowing the Japanese and their code of honour, the engineer's statements have particular weight, as Jarvis highlights.

"What we saw yesterday wasn't normal. For a Japanese, the culture of honour is very important, so to stand in front of the press and admit 'it's my fault' is not easy. I know that some journalists did not appreciate the gesture, but I think we need to consider the bigger picture. Tsuya is the head of the MotoGP project and he said that right now, with this bike, we cannot give the riders what they deserve".

There are those who ask what is being done to control a situation that appeared unthinkable at the start of the year. Jarvis admits that it's very complicated to know how long Yamaha will need to get back to the top.

"I'm not an engineer, and so it's hard for me to understand. We're working but it's clear we're running behind. We have a test at Misano and then after Silverstone we'll have another one at Aragon. so we're working to take steps forward, but it's not easy. It was clear today, there's gap between us and the others and it's not easy to solve this in a short space of time. I believe that we'll definitely be there next year. But we are not patient, we want to be there already now. We have eight races left and want to give the riders the best".

In his comments on Saturday, Rossi highlighted how teams like Honda and Ducati are moving closer towards the F1 model of organisation in MotoGP. Jarvis is nevertheless convinced that team reorganisation is not required.

"It's clear we've made a mistake, underestimating the importance of the new software with the Marelli ECU. We took the wrong path, so we need to improve. But Vale also said yesterday that the bike is good and he likes riding it, so we're not that far from the frontrunners. But we are here to win. It's not that they've not understood the situation in Yamaha; I think we made a mistake and now need to adjust our aim. We probably need to invest in certain aspects of engine development and make some changes to the system. But we can do it, we're strong. We have great engineers, and if we've done it in the past we'll do it again in the future".

To close, Jarvis is quick to congratulate Jorge Lorenzo on his great victory in Austria.

"I'm very pleased for Jorge, he's a friend of mine. We worked together for many years, winning three titles. He chose to go elsewhere and it wasn't easy at first. Step by step he's got to grips with the bike and this is the third race he's won, he's third in the standings. I have to say well done, he ran a fantastic race and I congratulate him".