At the end of one of the worst qualifying sessions in recent history for Yamaha, Valentino closing 14th and Vinales 11th at the Red Bull Ring, MotoGP project leader Kouji Tsuya made a surprise appearance, publicly apologising to his riders for the M1's poor performance in the presence of the media.

The Japanese engineer did not deny the Iwata bike's current limits.

“Today was a very difficult day - he explained - We know we'd be facing a very tough track and we're suffering in acceleration. The result is one of the worst qualifying sessions we've had a for a long time, Vinales also had technical problems with the bike and we're looking into that to resolve it before tomorrow."

Tsuya chose to stand up and take responsibility.

“I apologise to our riders and assure them that we're focused on improving” he said, responding to Valentino's recent criticism, the Doctor complaining about a lack of commitment on Yamaha's part.

“We're working harder than ever to find a solution. After this race we'll test at Mugello and then again at Aragon, after Silverstone. We're focused on solving our problems ahead of tomorrow's race”. 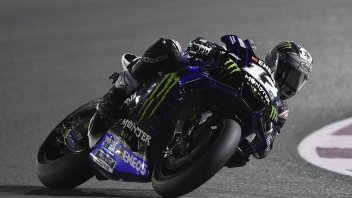 Vinales: "Yamaha understands how I drive and what I need"

Dorna signed from 2022 to 2026. The Ricardo Tormo circuit will alternate with the others on the Iberian peninsula but will remain the last race of the year.
15 hours 39 min ago

KTM's sports manager at the gates of 2020: "This is the highest point of engineering applied to motorcycling and has taught us to go beyond our limits"
2 days 15 hours ago

VIDEO - A challenge of reflexes between Red Bull Motorsport athletes, with Verstappen, Gasly, Albon and Kvyat who challenged Pol Espargarò
3 days 10 hours ago