Like never before, Marc Marquez knows that if he wants to win his fifth MotoGP title, he must first beat Ducati.

Or rather: the #93 Repsol Honda rider knows that if he wants to retain his lead, he'll have to deal with the Borgo Pagnigale red bikes, considered favourites in light of the 2016 and 2017 results.

Marc, also recalling last year's last-lap defeat, wants to humiliate the Desmosedicis on their 'home turf': the 4.6 km Red Bull Ring does not have a truly rhythmical section - in which the bikes' chassis might influence on lap times - rather it is all long straights and hard braking, on both the up and downhill, the typical  “stop and go” layout that highlights engines, braking systems and braking techniques.

For this reason, the theoretical favourite for pole would have been a Ducati rider, or one of those riding the GP2018 - Dovizioso, Lorenzo and Petrucci - but in actual fact, although the aforementioned riders did finish in that very order, they were pipped to the post by Marquez, first, with his usual crazy flying lap. Just like the previous rounds, the factory Honda rider was the only man able to bother the Ducatis, with Crutchlow closing fifth, and Pedrosa ninth.

Fielding what is undoubtedly the strongest bike on the grid right now, Ducati dreams of repeating the success of recent editions. It may well be able to do so, perhaps with a little team-work in the opening states, during which it will be key to stop the Spanish Honda rider or encourage him to make a mistake. The Bolognese four-cylinder, powerful and with very refined electronics, is a sure thing for numbers 04, 99 and 9 and even for Rabat and Bautista, who have the pace to run with the fastest.

Meanwhile, there was a lot of long faces in the factory Yamaha garage, not so much as a smile to be seen; Maverick Vinales and Valentino Rossi continue to protect (and request help), while Johann Zarco - with nothing left to ask for - is the fastest of all the M1 riders. No-one wants to point the finger at Valentino or Maverick but - since they began racing together - the development of the bike does not appear to have been definitive or accurate, with a lack of synergy between the Italian and the Spaniard, confusion reigning supreme. Somebody needs to get the team in order, perhaps they are trying to do just that, but it's not working. Not even one win since March, with those "Jeremy Burgess style" warm-up miracles that used to help Valentino now a distant memory.

it's a similar situation for Andrea Iannone and Alex Rins. The Suzuki isn't bad, but it's not yet great either: the results obtained thus far appear to be something of a flash in the pan and while the Italian often raises his voice in the garage, the silent Spaniard just focuses on twisting the throttle. The difference between the two is this: Andrea knows he's moving to Aprilia, Alex will stay where he is.

Considering that it won't rain, the Aprilias and sole KTM are seen as “under dogs” in the dry. Brits Redding and Smith are very strong in the wet, Spaniard Aleix Espargarò is better in the dry. The latter might have a chance of a top ten finish, if he can get away well. 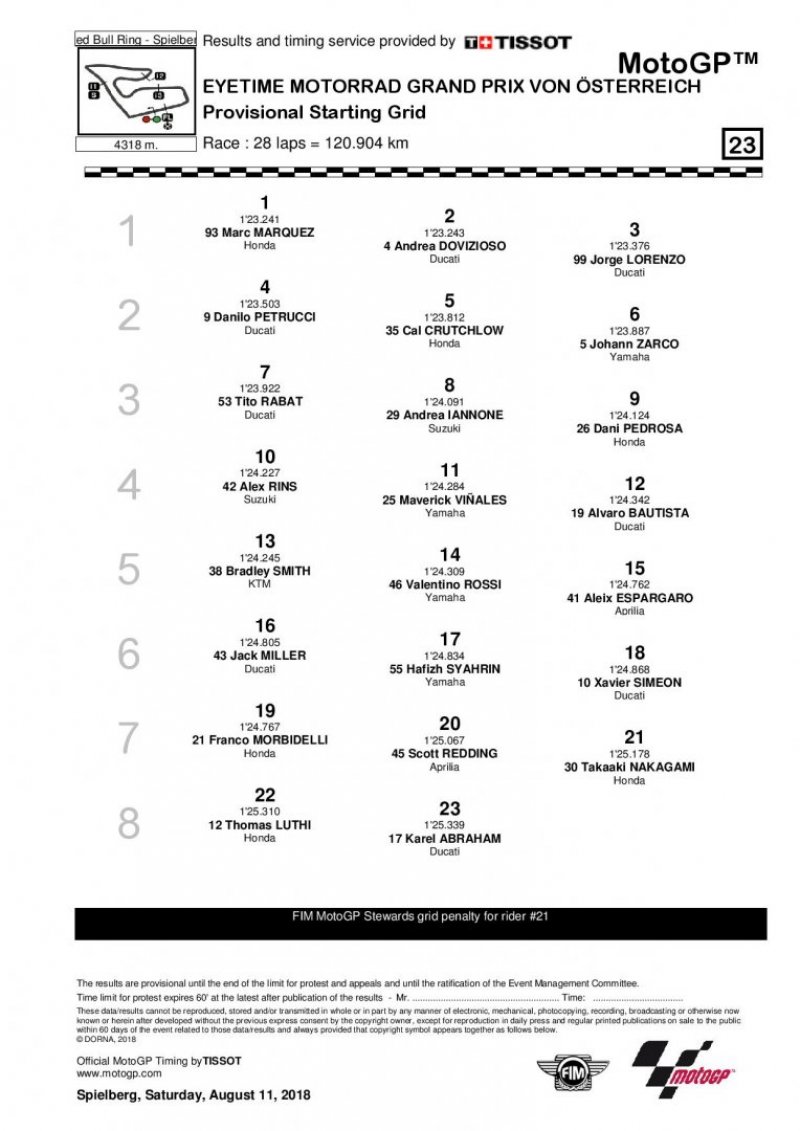