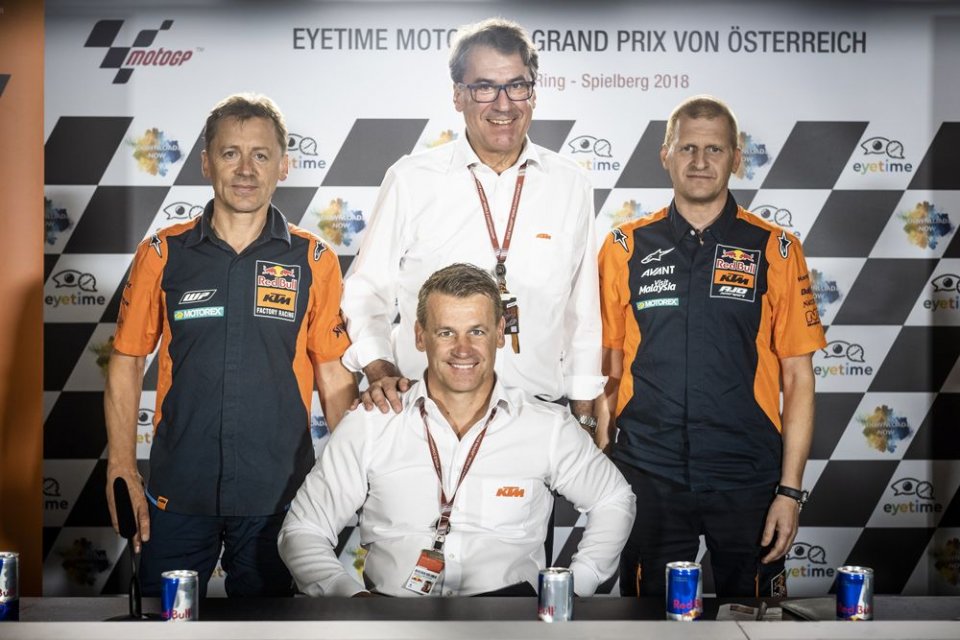 History tells us that KTM has always been able to win in any championship in which it competes, whether track or dirt. Now the Austrian manufacturer is focused on doing just that in MotoGP, the toughest challenge of all. The road is still long, but management is sure the result will come.

“What are our aims? To reach the podium and then the top step - smiles CEO Stefan Pierer - It doesn't matter how long it takes, it's what we want".

The big boss is not underestimated the difficulties, but is also aware of his company's resources.

“We began 27 years ago with off-road racing. It took 6 years for us to win the Dakar and 11 to do it in Supercross, but we did it. Now the road bikes represent 60% of our sales and so we simply had to enter MotoGP. Racing helps sell bikes, to create the brand, they give credibility and it's working. We're growing step by step but we won't give up. Our start was better than we expected but we also knew that the second year is usually more difficult”.

Pierer also confirms that KTM won't be doing away with certain characteristic elements, like the trellis frame.

“It's an advantage for us, because we're leaders in that technology. It works across all categories in which we race".

And there are many, KTM has deep roots in off-road racing and a very successful history. It has also achieved great things in road racing, the current Moto2 and Moto3 championship leaders (Bezzecchi and Oliveira) are riding an Austrian bike.

“When we started in the world championship, Ajo and I just had a small office in the back of a truck- recalls Pit Beirer, motorsport director - This weekend, at the Red Bull Ring, we have 72 riders on our bikes, including the young guys in the Rookies Cup. Our can't believe the progress we've made”.

The negative note is that, due to injury, only one bike will run in MotoGP, that of Bradley Smith.

“We're not panicking, we know what we're doing and how tough the MotoGP is. We knew we'd go through tough times and we have. If I look at the results, compared to last year we have double the points and have reduced the gap to the front in every race. To be honest, I don't consider it a disaster to finish 20 seconds from Marquez, the strongest rider right now. The level in MotoGP is very high and if you're one second back it means starting 18th. We're aware of this, but we're not just here to take part”.

For this reason, KTM has decided to up the ante, managing to get the experienced and professional Tech3 to move over from Yamaha. Bierer is also learning from the mistakes, and will strengthen the test team next year.

“Kallio's injury has made us realise that we need another test rider so as to keep up with development. Mika will continue on as test rider but he won't be alone. Who will the second rider be? Pedrosa would be very interesting and we're talking to him, but we're not the only ones- he smiles, referring to a similar offer from Honda - Smith is also on the list, he's really putting in the effort despite knowing that he won't be our rider next year and so I have to thank him for his professionalism”.