Rain showed up and ruined the afternoon at the Red Bull Ring, putting paid to teams' plans. The rain forced riders to remain in the garage for almost half an hour during this second session.

With twenty minutes to go, the first warriors headed out looking to set a fast time. The best of FP2 proved to be Marc Marquez, who set a reference of 1’33”995. The Spaniard completed seven laps and was the only rider able to duck under the 1’34” barrier.

Behind him a surprising Scott Redding. In wet conditions, the Aprilia rider showed great confidence on his RS-GP, finishing half a second from the six-time champion (+0.543). The Red Bull Ring has always been a Ducati stronghold and once again today the red bikes were up at the sharp end. Danilo Petrucci (+0.986) places third, followed by the factory GP18s of Jorge Lorenzo (+1.493) and Andrea Dovizioso (+1.516), roughly a second and a half back.

Nothing to worry about though, as taking risks in these conditions would not make sense. This doesn't take away from the fact that Marquez' performance in the wet is impressive. over to the Yamaha camp and Valentino Rossi completed 14 laps, just like Alex Rins and Johann Zarco. At the session's end, the Doctor was lying tenth, behind Cal Crutchlow (+2.207) and more than two seconds from the front (+2.332). Things were worse for Johann Zarco, just fifteenth ahead of the Aprilia of Aleix Espargarò, while Maverick Vinales is down in twentieth, after completing eight laps.

Back to the top half of the timesheet and the KTM of Bradley Smith stands out in sixth place (+1.975), followed closely by Jack Miller, while Andrea Iannone just misses out on the top ten, as do Xavier Simeon and Franco Morbidelli. Dani Pedrosa is in last position. 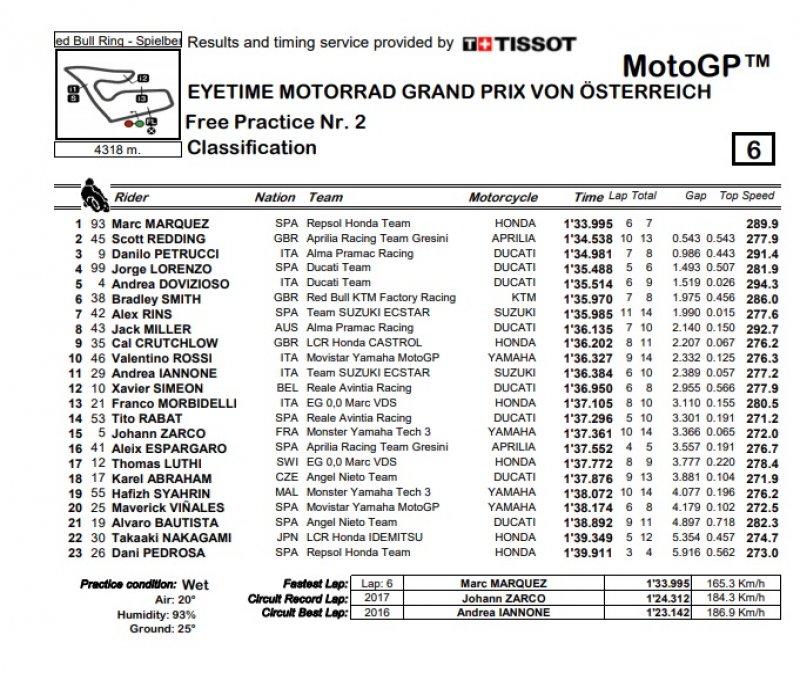 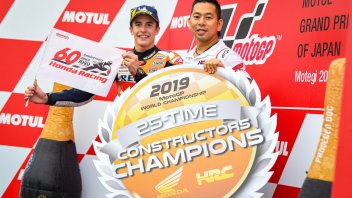 Marquez: "I started running low two laps from the end, but I did it."

Defending champion wins ahead of Scholtz and Gagne. 5th and 7th, Wyman's and Jacobsen's two best Ducatis. Elias stopped by a problem.
41 min 12 sec ago

The reigning champion started has started 2020 in the best possible way, heading his teammate Jake Gagne. Race 1 at 22:00 on Eurosport
22 hours 28 min ago

In a video on You Tube, the driver defended his reasons but confirms the end of his experience with Audi in the Formula E
4 days 8 hours ago

It was decided by the Board of Directors via video conference call. Previously the FIM-Dorna contract provided for a minimum of 13 Grand Prix. In F.1...
6 days 1 hour ago

An embarrassing moment for Audi Formula E driver Daniel Abt who, during the virtual race in Berlin, had an eSports professional race in his place:...
6 days 19 hours ago