The technical and demanding Brno track is one of the widest on the entire world championship calendar and, so they say, favours overtaking during the race. No matter what the starting position is, the riders on the first three rows can make a play for the win.

So, with no championship points up for grabs in the qualifiers on Saturday, are they really important on a track like this? The answer is yes: besides verifying the potential of your bike at the limit, the rider who takes pole position acquires confidence and sends an important message to the adversaries: tomorrow you will have to reckon first and foremost with me. A perfect start – assisted by launch control – race pace and tyre choice will determine the final result. Speaking of tyres, Piero Taramasso of Michelin stated that all three available choices (hard, medium and soft) will be able to go race distance without a problem, with a small doubt on the front soft, rather stressed on the long, downhill corners.

The situation is mixed between the brands in the Czech Republic: Dovizioso’s pole position returns Ducati to the front spot, after the one Lorenzo earned in Barcelona; Andrea’s number 04 Desmosedici was reminiscent of Casey Stoner’s number 27 on the same track when, in 2007, the Australian smoked the rest and then went on to win the Grand Prix race. If this is the assumption, the smiles in the Ducati camp after qualifying represent confirmation as well as hope and Jorge Lorenzo’s fourth place could even help the Italian because Jorge, as usual, will attempt to shoot the hole already on the first corner and an ‘all-Red’ pair in the lead would be the most complete and strongest of the big names. Keep your eye on Danilo Petrucci as well with the Pramac GP2019, sixth today and always a threat in the early phases and a fierce battler in the duels. In Brno, the Italian once again proved to be in better form than Miller, who crashed during Q1.

Valentino Rossi - once again - made the difference with the factory M1. The nine-time world champion is Yamaha’s extra weapon in this stage of the season and the difficulties shown by Viñales give credence to this theory. Maverick struggled in free practice, went through Q1 and in the end took the twelfth best time. Johann Zarco of team Tech3 (which will leave Yamaha and move over to KTM in 2019) awoke from a deep slumber, but not quite enough and his seventh time at more than half a second behind Dovi will, for now, not place him among the serious contenders for the win, although anything can happen, and no one has forgotten last year’s flag-to-flag. In the meantime, a bet on Rossi is not a shot in the dark: Valentino won his first Grand Prix of his extraordinary career in the Czech Republic and between 125, 250, 500 and MotoGP, he has no less than 7 total victories here.

The situation is similar for the Honda riders, with Márquez third from the front row and Crutchlow fifth. Seeing them ride, both the team Repsol Spaniard and the LCR English rider seemed to be in more difficulty than Dovizioso and Rossi and Marc himself admitted as much: “The Ducatis and Valentino are the most dangerous adversaries here.” We’ll see tomorrow if Marc will be ready to take the usual risks that have earned him the championship leadership and various spectacular crashes this year.

The factory Suzuki machines did not demonstrate the speed of the other factory bikes. In fact, Iannone and Rins will start respectively eighth and ninth, behind the “satellite” riders. Sylvain Guintoli also came to Brno to provide some extra manpower with the entire team from Hamamatsu set up in Europe, but despite the great efforts, only Dani Pedrosa did worse than them, although still better than the already mentioned Viñales.

The nit is a crescendo of gaps and distances: Franco Morbidelli with his Marc VDS Honda will be just ahead of the Desmosedici ridden by Alvaro Bautista, intent on redemption for his crash in Q1 and eager to sign a contract for next season. Bradley Smith would like to finish the race with the best KTM and Pol Espargaró will be fending off the attacks of his teammate.

We mentioned how starting from the front rows of the grid at Brno – perhaps - is not so important, but one thing is certain: starting from the back will definitely not be an advantage for riders like Luthi, Abraham (who knows the track like the back of his hand), Aleix Espargaró, Scott Redding and Xavier Simeon. The Aprilia riders suffered crashes and technical difficulties, the Belgian seems to have a subscription for the last spot on the grid and, unless there are some surprises, it will be difficult for them to do miracles in the race. 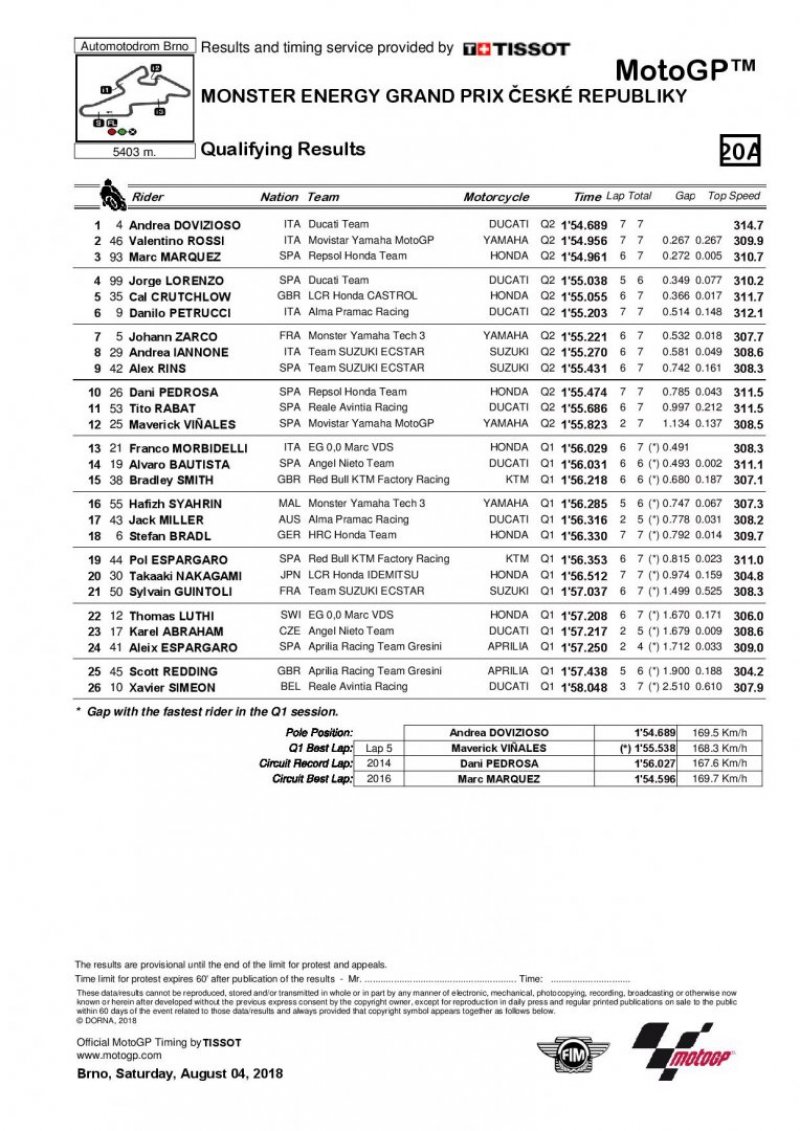 It was decided by the Board of Directors via video conference call. Previously the FIM-Dorna contract provided for a minimum of 13 Grand Prix. In F.1...
1 day 3 hours ago

An embarrassing moment for Audi Formula E driver Daniel Abt who, during the virtual race in Berlin, had an eSports professional race in his place:...
1 day 21 hours ago

Rainey: "With the way things are in California right now, there is no way we can race with spectators at Laguna Seca in July ". The series is set to...
4 days 6 hours ago

The round scheduled for the Circuito do Estoril from the 4th-5th July would go ahead as planned and become the season opener, to be followed by the...
1 week 10 hours ago