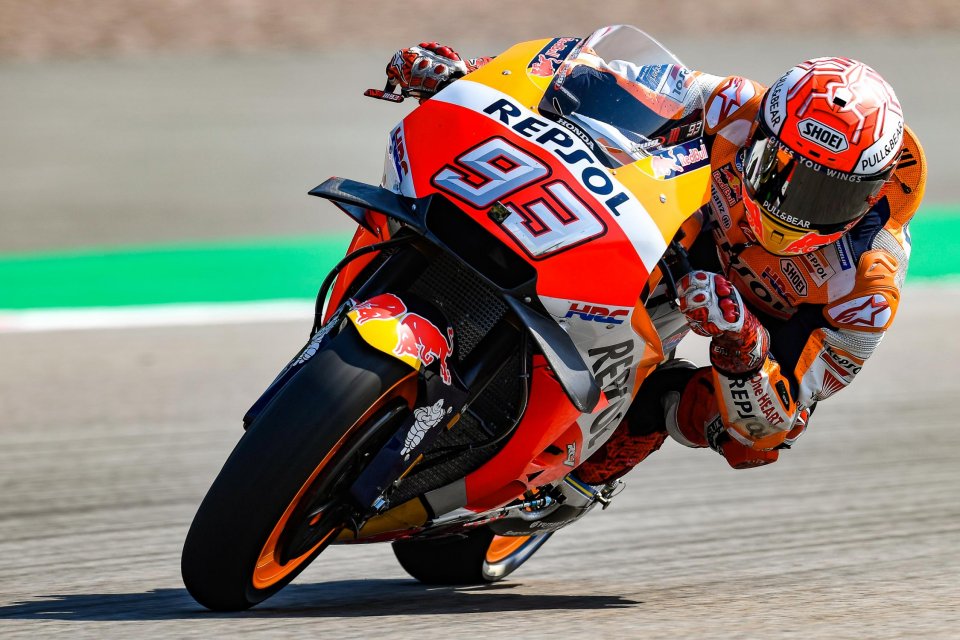 It was no walk in the park as some may have though, but for the ninth time in a row, Marc Márquez will start from the first spot on the Sachsenring grid. The Spaniard had to squeeze his Honda from the first to the last ounce, making two attempts with the hard front tyre and one with the medium in between, keeping the soft on the rear the whole time.

The final attempt was the decisive one, in other words, the one where he stopped the clock at 1’20”270 to earn the new best pole position of the track as well as the first spot on the grid for the race tomorrow. “Things went similarly to last year –Marc began – and it was difficult because with the second tyre, things went well, but with the last one not so much. On the first lap with the third tyre I made a mistake and almost crashed. On the second lap I made another small mistake, but it went well. I wasn’t sure I had pole position. Starting from the front row is important.”

Trying to break the Márquez streak was Danilo Petrucci, able with the medium – soft combination and a tow from Lorenzo to take pole momentarily, only to then have to settle for second by 25 thousandths. “I hooked onto Jorge and I thanked him. I knew I was fast this morning. We beat the record, but I’m in second place. In any case, tomorrow we will start from the front, but the final 15 laps will all be up in the air.”

The question of the tow did not set entirely well with Jorge Lorenzo, third by 57 thousandths. “A pity, because it’s always the same riders who catch a tow, but anyway it is fair. A pity especially because of the mistake on the last turn. Without that, I could have battled for pole position. When I arrived here I considered the front row a big goal, so it’s all good.”

Just off the front row is Maverick Viñales, the best of the Yamaha riders and a contender for the pole for much of the session. He will start one spot ahead of Q1 survivor Andrea Dovizioso who moved up to fifth place on a day that has not been entirely positive for him. Alongside him will be Valentino Rossi: 262 thousandths behind, but it is a sixth place from which he can aim to obtain an important result.

Behind him are Crutchlow, Andrea Iannone and Bautista, crashing on the last available lap, while Dani Pedrosa closes out the top ten ahead of Rins and Nakagami, making his first historic career appearance in Q2. It was a Q2 that Aleix Espargaró missed by a hair and he will in any case have to start with a six-position penalty for having disturbed Márquez during FP3. In the KTM camp, Pol Espargaró was the best with his 16th place time, whereas Simeon will bring up the rear on the grid. 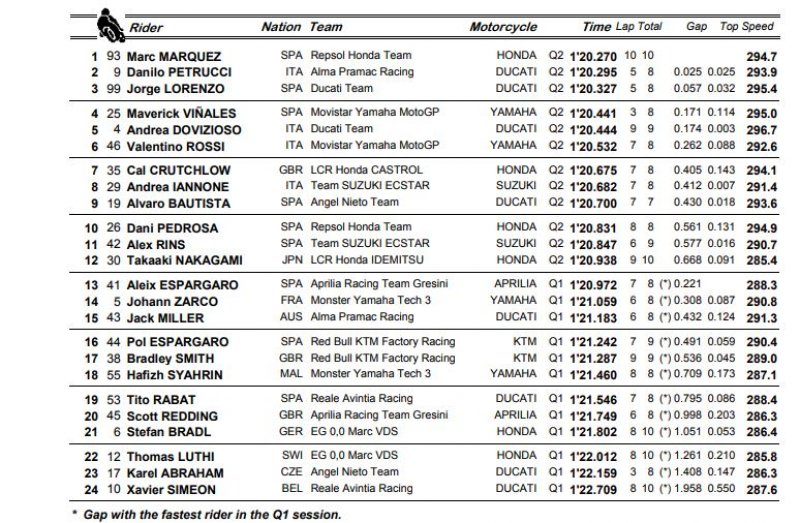