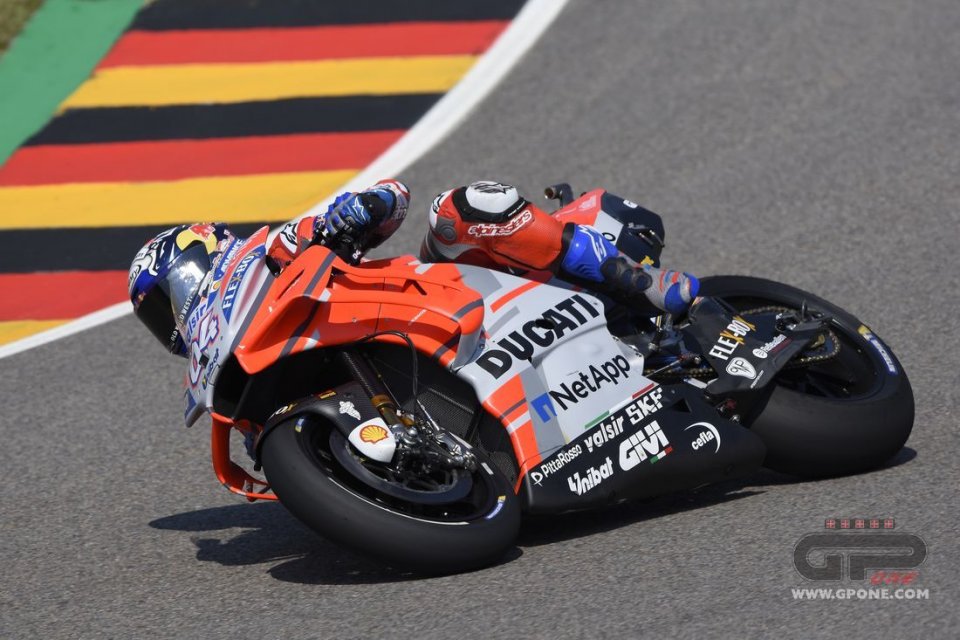 Andrea Dovizioso, as always, has his feet planted firmly on the ground. The red wave that hit the Sachsenring (three GP18 machines in the top 4) confirms what the Italian thought, but there are still some pieces missing to complete the puzzle. The problem, as always, is Márquez.

“It is still too soon to know if we’ll be able to beat Marc - he explained - Today all the Ducati riders were fast, as I expected. The improvements are clear compared to a year ago and even on pace we don’t seem to be far off.”

“We don’t know how realistic today’s times are - he replied - Above all, we don’t know what our adversaries’ tyre wear is and that will make the difference in the race, even more than last year.”

From this point of view, Márquez seems to be a step ahead of the rest.

“Marc had the chance to not put on a new tyre at the end of the session to find performance, so he was able to use the entire session to work on the tyres - he pointed out - That means that he could afford to do that and it will certainly not be easy to beat him.”

In any case, the GP18 got close and Lorenzo pointed out that they cut the gap behind Márquez in half, especially in the first half of the track.

“It is hard to go that far into detail - Andrea said - I think that we have improved a bit everywhere, without radically changing the DNA of our bike. I certainly found a good base on which to work from the start.”

As Márquez also observed, the Desmosedici doesn’t seem to have unpalatable tracks. That means that one may think that on friendly tracks, the GP18 will be able to make even more of a difference.

Dovi disagrees with this analysis: “This year the championship is very different - he expressed his opinion - I think that we are more competitive and the fact that we have been at the front on all the tracks demonstrates that. We have always been able to make a play for the podium or the win, even if mistakes and hard luck have kept us from bringing home a lot of points. This means that we are fast even on the tracks where we were not last year, but I don’t expect us to be able to make a greater difference on those tracks where we were particularly competitive. I think that there is generally a better balance.”