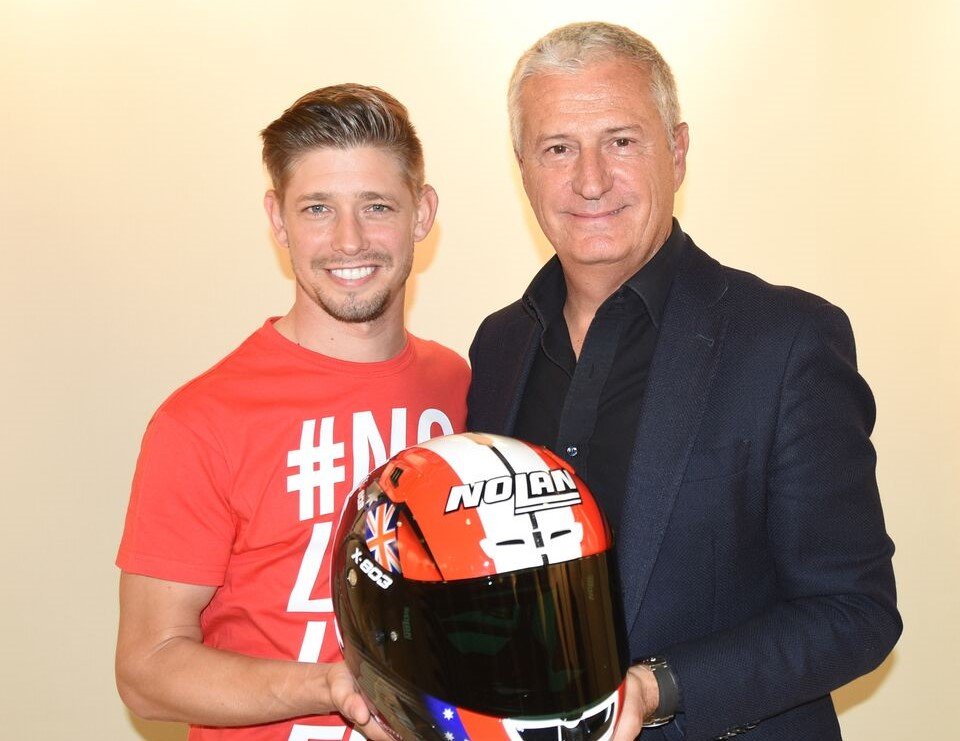 For Casey Stoner, the word “loyalty” is fundamental because it perfectly sums up his way of being. On hand with the entire family - wife Adriana and two daughters - at the Nolan headquarters near Bergamo, the Australian and the Italian helmet manufacturer are celebrating the 16 years together, full of success, victory and front page headlines.

Casey really likes the new X-803 U.C. Stoner Replica and he is still a simple and direct person: “I wish to thank Alberto Vergani and Nolan - he began - It is partly thanks to them that I was able to achieve my goals. It is a true pleasure for me to be here in Italy, even if my life has changed without racing: I am now a dad and I enjoy my free time without the stress of travel and the paddock. I have had a lot of proposals to come back to racing, but I have made my decision: I have had enough. I prefer watching the Grand Prix races on TV.” 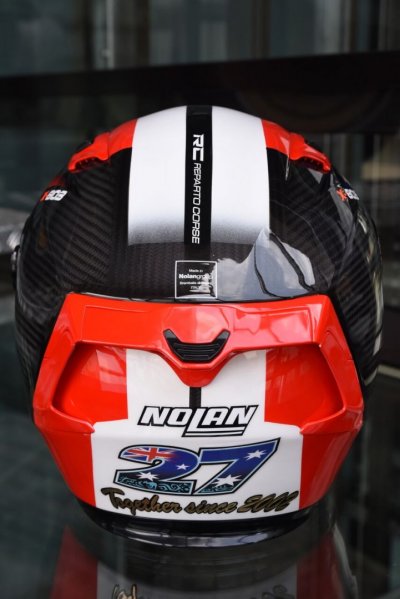 Watching the races, what are your thoughts on the MotoGP championship?

“The sole tyre supplier, Michelin, and the same electronics for everyone have levelled the playing field for everyone, resulting in spectacular races like the last one we saw in Assen. Nevertheless, it is still the fastest rider who makes the difference: in Holland, Marquez won again, confirming his well-deserved first place in the overall standings.”

Do you think that someone will be able to stop his race for the seventh title?

“There are a lot of strong riders. The Rossi and Viñales on Yamaha are following Marc’s Honda, even though they haven’t had even one win. Right now, if I’m honest, Valentino does not have the pace to be able to win the championship, although he remains a top rider, always in the top positions and ready to finish on the podium. He is like me: if it weren’t for all these electronics that manage the bike, if the power was controlled only by the rider’s right wrist, Rossi would still be number 1 on the track.”

What do you think about Ducati’s 2018 season?

“Dovizioso won a lot in 2017, making life difficult for Marquez and, I can tell you, winning becomes addictive. This year he has had a few difficulties that have slowed him down but, and I am convinced of this, Andrea will soon be battling for the top step of the podium again. As for Jorge Lorenzo, it’s a different story.”

Do you think his separation from Ducati is a pity?

“I think so, it’s a pity. Jorge had to reinvent himself in Ducati with time and experience. The wins at Mugello and Barcelona did not come by chance: he prefers the speed of long, flowing corners and on both occasions he managed to pull the pin and run away with the race. Before the season ends, Jorge could win again. Lorenzo and Ducati split up too soon.”

Petrucci will replace him.

“I know Danilo well and he is truly a strong rider. Petrux ‘busts his ass’ during the tests, providing excellent indications for the mechanics during the development phase of the Desmosedici and he is fast in the race. Petrucci is faster than Jack Miller. He is the right choice for the 2019 Ducati.”

Lorenzo, on the other hand, will be riding alongside Marquez in the Honda camp.

“It will definitely be an explosive pair, but don’t ask me for any predictions. It will certainly be entertaining, like watching a film at the cinema, complete with popcorn.”

Casey, very attentive and technical, also provides an overall analysis of World Grand Prix Motorcycle Racing: “There are a lot of strong riders - he explains - but there are still only a few true talents. Now there are academies, which are outstanding vehicles for raising up and training new names. Nevertheless, if I were a team manager, I would prefer to focus on one or at the most two guys with the goal of helping them grow as much as possible. It would be a good idea but... I don’t think I will ever go through with it.”