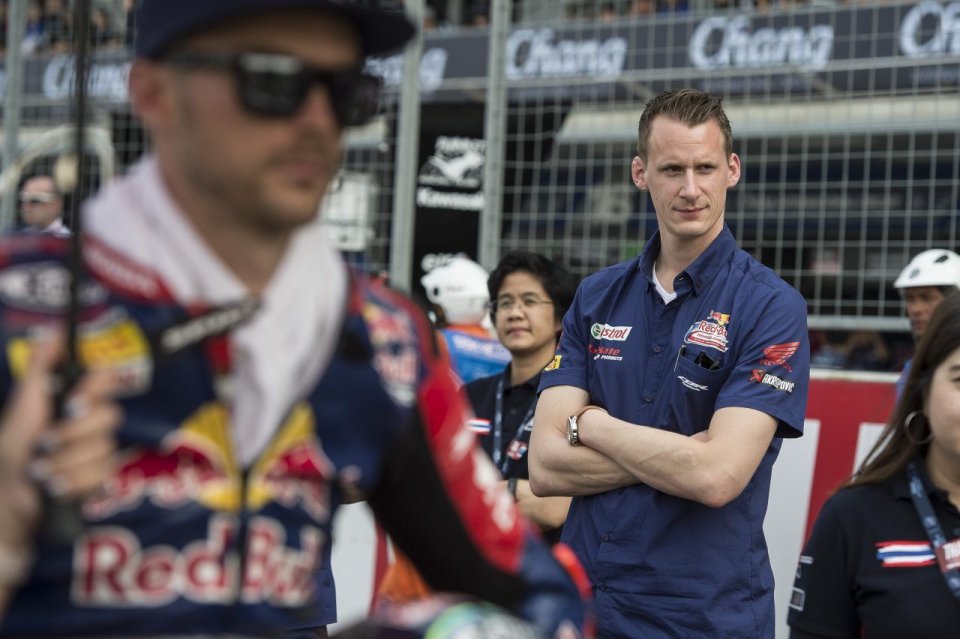 With only a few names confirmed thus far, riders like Rea and Razgatlioglu for example, the Superbike market is only really getting going now. The feeling is that there are more riders than bikes available for 2019, meaning that some risk being left without a ride

Among the most highly-sought after bikes is the Yamaha, but particularly the Honda. The Fireblade has made huge steps forward since last year with Leon Camier and now the bar is raised. In the Ten Kate camp, team manager Kervin Bos is already planning for 2019 and has very clear ideas.

“It's still too early to talk about next year, but it's also true that we're discussing it. The aim is to conclude the negotiations as soon as possible. Our priority is to reconfirm Leon, in that we've gone in a certain direction and I think the fruits of our labour are quite clear”.

It seems that the plan is to follow HRC's example in MotoGP, aiming to have two strong riders on the team.

“Exactly, having two high-level riders definitely raises the bar. We don't want to gamble, preferring to go with first-rate riders who are experienced”.

Dosoli has said that he's looking for young riders. At this point, might Sykes be a solution?

“Tom is a world champion, we all know his talents, not exactly a secret. He's a big name, as is van der Mark and maybe others too. Right now the market is not a priority, also because our work focuses on the track”.

Back to the track then. After Misano, the Superbikes will stop for almost two months. Is there anything new in the pipeline?

“There will be various updates in all areas. We'll bring a new front fork, a new frame and also some new elements in terms of the aerodynamics and suspension. With all these components we aim to have the Honda in the top five, close to the podium ”.

Carlo Fiorani is also present at Misano. After Assen, Honda's communications manager has decided to pay a visit to see how the team is getting on. As well as the riders market, there's also the matter of the renewal between Honda and Ten Kate ahead of 2019.

“As you know, we have a contract that expires this year and so we're talking - states Fiorani - no decisions have been made as yet. Traditionally, Honda discusses these matters towards August time, after the Suzuka 8 Hours”.

Is your priority to stay with Ten Kate?

“The priority is to stay in Superbike, but nothing's defined yet. It's similar to previous years. I've heard this rumour, about a possible split, but it's a rumour. Last year the same rumour, and then everything stayed the same”.

Bos has stated he wants a strong rider alongside Leon.

“As for the riders, we're holding off, in that Superbike is a Honda Motor Europe programme in collaboration with Japan. The Honda budget for SBK isn't decided until August”.

Would a SBK or a MotoGP rider be better, considering the surplus?

“A strong rider is better (he jokes). In the past, MotoGP riders have scored good results in Superbike, but only after a 'training' year. This depends on various factors, like tracks or tyres. For a Superbike rider, the results come more quickly”.

“I've seen that he's talking to Yamaha and has been approached by other teams. We haven't made any selections yet”.

Will it be easier than the negotiations with Jorge?