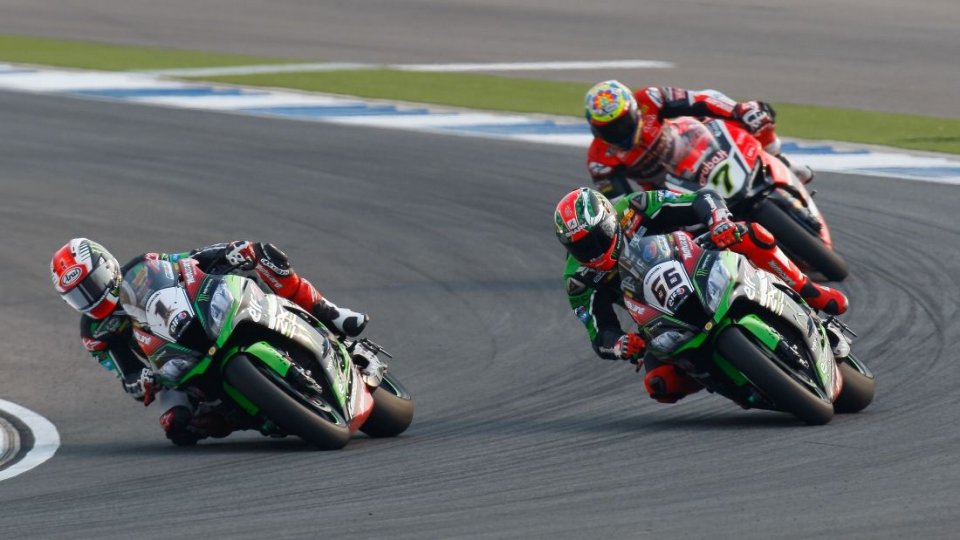 Misano, the last stop before the holidays for WorldSBK. Not everyone will get a break though, as Rea, van der Mark, Lowes and Camier will fly straight to Japan for the Suzuka 8 Hours. Before that, the ninth round of the production-derived series will see riders take to the track dedicated to the memory of Marco Simoncelli this coming weekend

While on the one hand, the standings speak for themselves, Johnny Rea holding a significant 75-point advantage over Chaz Davies, his closest rivals, on the other hand it will be interesting to see how rider market dynamics might impact on the Italian round.

In the Kawasaki camp, the atmosphere is far from idyllic, Rea and Sykes practically separated under the same roof. The Cannibal will remain on board the ZX-10RR for a further two years, while #66 is just a step away from saying farewell. The final straw came at Brno, the damage now irreparable. Rumours suggest that Tom is ready to climb on the Yamaha, the R1 that has so impressed this year in the hands of Lowes and van der Mark. We're sure that the two riders will be aiming for the top step of the podium, one they also reached in last year's edition.

Misano is a home round for Ducati of course, and so Davies and Melandri are also obliged to do well. Let's not forget that both riders are awaiting a contract renewal with the Aruba team. Expectations are high, particularly in the Italian's case, Marco having slipped down to sixth in the standings, 152 points from the front. And how about Xavi Forés, who since coming to Europe has only reached the podium on one occasion, at Aragon.

They'll have to deal with Johnny Rea of course, a man who has no intention of making life easy for his rivals. His double win at Laguna Seca has helped propel the Northern Irishman towards his fourth world title, with just five rounds left to run. Aprilia in the meantime seeks confirmation, having received a boost in Monterey thanks to Eugene Laverty's podium, though the Milwaukee team's future remains uncertain, contract renewals with the Noale manufacturer still to be worked out.

It will be interesting to see the level of competitiveness of the MV Agusta, in the hands of Jordi Torres while, in the Honda camp, Leon Camier continues to work to return to full fitness. Let's not forget the BMW of Loris Baz either. The Frenchman expected very different results during this first part of the season. Perhaps Misano can provide him with an opportunity to get ahead with his holiday homework.

Aleix Espargarò reckons the Ducatis will go away immediately, but top 6 is...