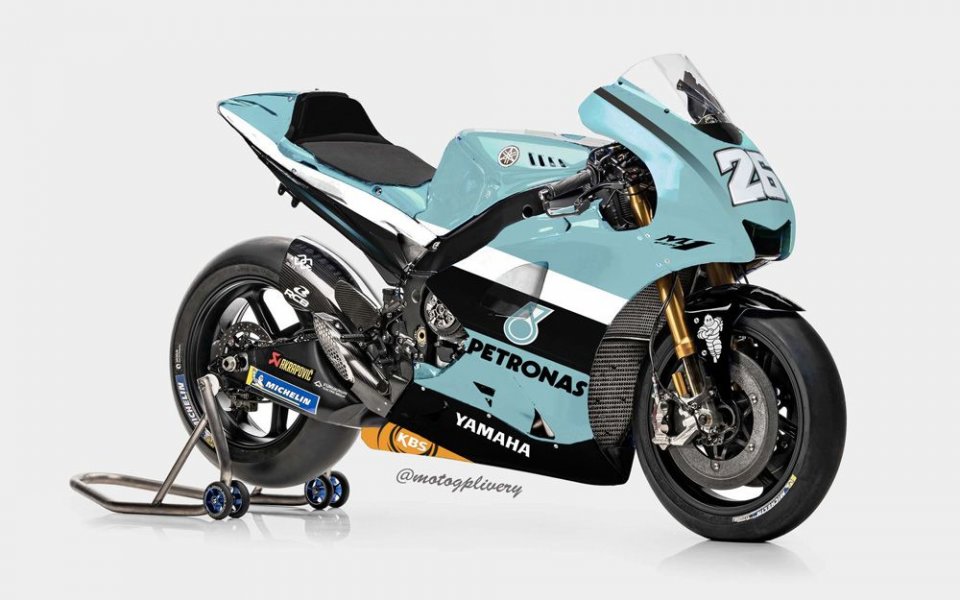 Who knows whether the satellite Yamahas will have the livery that you see above, conceived by MotoGP Livery (many 'futuristic' designs appear on its Twitter profile). What we do know is that Petronas will definitely feature as sponsor on the “secondary” M1s, an agreement having now been reached.

Having lost Tech3, an historic partner, they can breathe a sigh of relief in Iwata and start to plan for the immediate future. The deadline for ordering the bikes was set for 30 June and an agreement has been reached with the Malaysian sponsor just a few days prior to said date.

There will once again be four Yamahas on the grid in 2019 then, ridden by two riders who are currently on a Honda. The first will be Dani Pedrosa, who was considering retirement prior to Barcelona but has been tempted by this opportunity. The second will be Franco Morbidelli, an innocent bystander in the Marc VDS debacle. The Italian had a contract to ride with the Belgian team next year, but recent events have seen this draw to an unexpected conclusion. It is almost certain that van der Straten's team will not be in MotoGP next year.

Problems inside the team have seen Yamaha change its plans, the manufacturer having originally lined up Marc VDS as a replacement for Tech3.

Petronas has thus brought a solution to the problems. The Malaysian firm is closely linked to the Sepang International Circuit and, as of 2019, wants to strengthen its presence in the championship, participating in all three classes from Moto3 to MotoGP.

An ambitious but financially sound project, a breath of fresh air for a paddock that is always in search of reliable investors.

On paper, the team is intriguing. As we wait to learn whether Yamaha will supply at least one factory bike (Tech3 would always receive versions from the previous year), the two riders are very interesting. Pedrosa is a highly experienced champion, his in-depth knowledge of rival Honda perhaps useful when it comes to development. Morbidelli is a promising youngster who hasn't yet shown his full potential on a satellite RC213V that doesn't exactly shine in terms of its ease of use or competitiveness.

It remains to be seen whether Petronas will join forces with an existing structure. It's no mystery that Team Angel Nieto is involved in this negotiation. An initial announcement regarding the Petronas-Yamaha agreement is expected at Assen, with further details to follow.