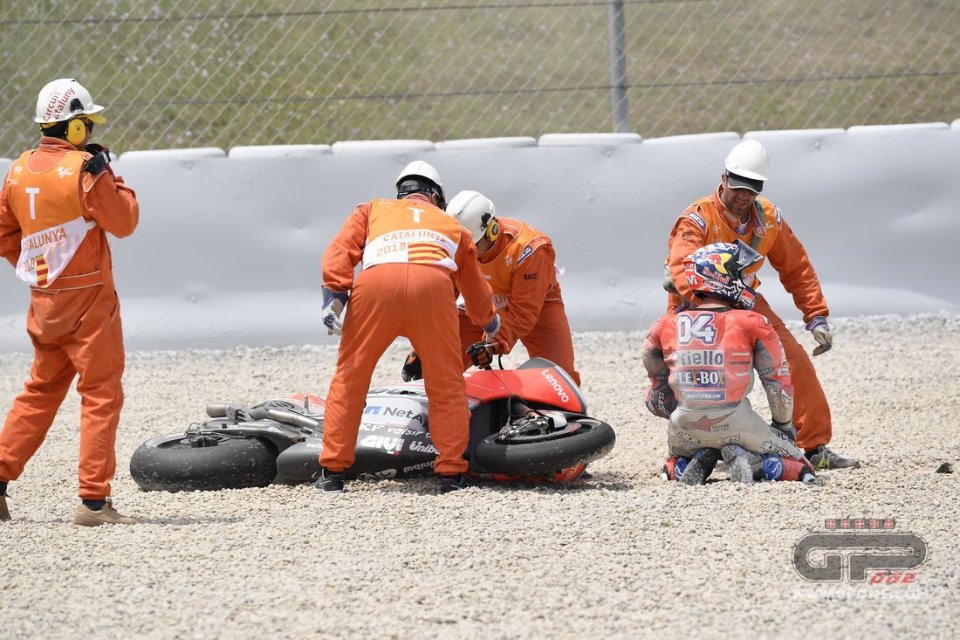 Montmelò leaves a bitter taste in Andrea Dovizioso’s mouth, because the crash sixteen laps from the end sentences him to his third zero of the season after the one in Jerez and then Le Mans. The disappointment on the Italian’s face is clear on the day when Jorge Lorenzo took his second victory astride the ‘Red’.

“I was at the limit on that section. I didn’t want to lose Jorge and Marc, but unfortunately it takes very little with these tyres – he began – I arrived to fast at that point, about 4-5 km/h too fast, and that was enough to lose the bike. I’d say that it is the classic Michelin mistake (joking). At these times, you just have to stay calm and try to understand – cautioned the number 04 rider – From what I saw in the race, Jorge showed a different style, especially in braking. I was at the limit. I was missing two tenths and maybe there was a way to ride differently like Lorenzo so that is what we need to do.”

With this crash in Barcelona, Dovizioso is 49 points behind Marquez in the overall standings.

“The goal is the World Championship and when you go home with a zero, it is devastating on a mental level – he pointed out – Aside from that, with a few small changes we can be even more competitive. It will certainly take a few days to metabolise the race – he added – but the only thing I need to do is understand. So we need to take advantage of the data to improve and grow.”

Of course, there was a comment on the tyre issue.

“The Michelin tyres have their characteristics. There was strange grip here and I couldn’t get the bike to drift. This aspect characterised me, unlike Jorge, who proved to be consistent. His riding style worked in Barcelona.”

Dovizioso does not make excuses and keeps morale high.

“We just need to understand – the Italian reiterated – because we are fast and we need to work on the details. It won’t be easy since here in Barcelona we found particular conditions, so I don’t know if a certain style will work on all the tracks. As I said: it is not easy to understand, but I noticed it watching him in the race.”

The Majorcan’s two wins become no small puzzler for Andrea.

“It’s normal that it is like this and it has always been like this – Dovizioso admitted – In every situation, there are pros and cons. When you have to compete with such a fast rider, it certainly is not easy to get ahead of him, but at the same time, it is a chance to improve.”

So, Dovizioso has no intention of giving up.

“Few know what difficulties a rider must overcome in order to arrive at the results – he concluded – It is not such a horrible moment. We’ll get back on our feet. All of these incidents are a series of circumstances that occurred, obviously when you win, you have to risk more.”

Dovi has no doubts about what penalised him the most.

“The Le Mans loss is still the most serious.”