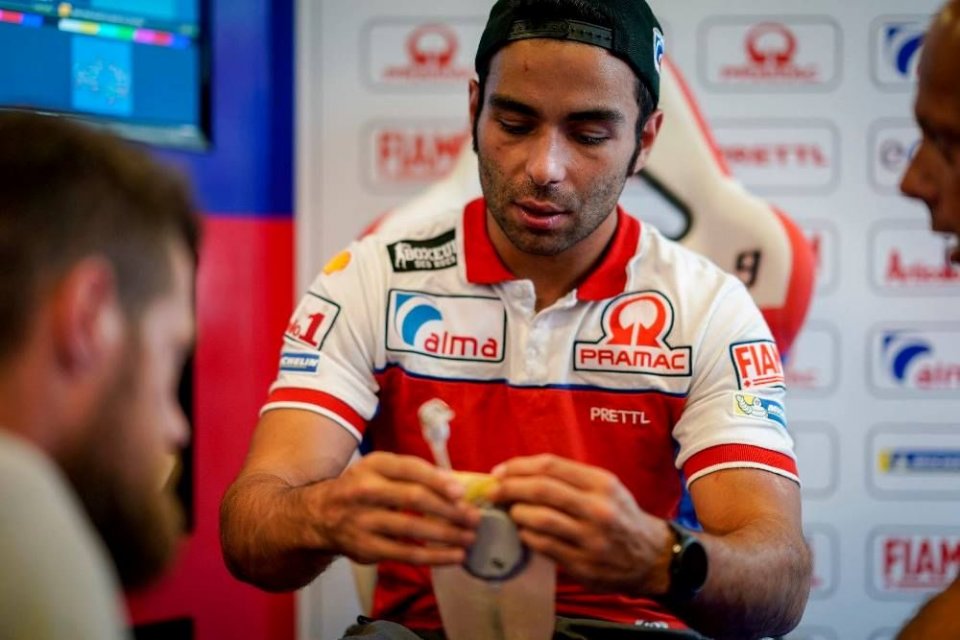 There are three Ducatis on the first two rows of the Montmelò starting grid. One of them is Danilo Petrucci’s, who did the sixth best time in qualifying. The Italian rider prefers to keep his feet planted firmly on the ground for Sunday.

“I am satisfied with this day since the goal was the first two rows and I succeeded – Danilo began – Right now I think that I have the pace to stay with the top five. Lorenzo is making the difference, whereas I am at the limit with the front – he added – Among other things, in qualifying I followed Valentino, but we both lost the front and I ended up getting in the way of Marquez.”

“I didn’t know he was there. I saw it on the jumbo screen – he recalled – I apologised to him and he said not to worry about it.”

Attention has already shifted to the race.

“Obviously I don’t have the right confidence – he admitted – Lorenzo is making the difference. He stops the bike better than we do and we are unable to figure out how he does it, so I’ll try to manage the tyres better in the race – he continued – I wanted to do that at Mugello, but Marc hit me, whereas last year here in Barcelona it was the opposite. Anyway, I hope to be in my position at the first corner (smiling).”

Tyre choice will not be so simple.

“We’ll use the soft at the rear and for the front we’ll see – the Pramac rider pointed out – Unfortunately, my weight penalises me in hot conditions, because I unload less to the ground and it seems like the bike slides more than for the others.”

Looking at Jorge’s telemetry could be helpful.

“I looked at his data. The fact is that he brakes and stops the bike. I brake at the same point and it is as if someone is pushing me from behind. From this point of view, he has made the difference and his pace is impressive. For the race, Jorge is the favourite, along with Marc and Dovi. Then we’ll make a play for it with all the others.”

The performance of the ‘Reds’ certainly has not gone unnoticed.

“We are working hard – Petrucci concluded – The level of Dovi and Jorge has allowed them to grow more. In fact, we push one another. I think I have one of the best bikes and one of the best packages.”

The other side of the coin in the Pramac camp is Jack Miller, out of Q2.

“Unfortunately, I struggled form the start with the setup – the Australian commented – I struggled in free practice and in qualifying. It is a critical situation because I can’t find the right sensations with the tyres either. All we can do is work in view of the race on Sunday.”

Miller does not want to give up.

“In FP4, I managed to find a few positive notes that will be useful tomorrow afternoon – he added – Tomorrow morning we’ll need to look for more consistency, especially on turns, to get back to the sensations we had before in the previous races.”