We're only at the mid-season point but it's already time for a divorce: Czech rider Ondrej Jezek and team Guandalini are splitting after the rider's latest home round at Brno.

Results proved somewhat lacking for him and the team - of the 14 races run, just 2 championship points scored, despite the rider's speed and team's hard work, proving that it's not easy to stand out in Superbike.

Having concluded the recent races in front of his home crowd, Jezek himself confirms: “the decision has been taken by the team, not by me. So you need to ask Mirco Guandalini about the reasons behind this decision; he maintains that I spoke ill of the team but this is categorically untrue”. 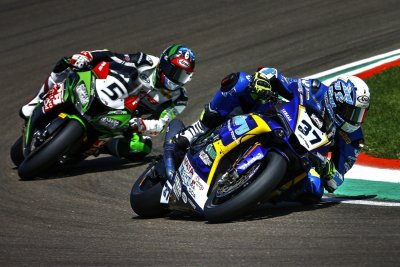 Who will take Jezek's place? The R1 is free and Laguna Seca is just around the corner... Many names have been mentioned, the most likely being Karel Hanika, former Moto3 rider, also from the Czech Republic. Karel has competed in the World Endurance championship for a while now, a series that has relaunched his career, after a spell in the Spanish CEV championship.

The Californian Yamaha rider took the flag alone ahead of teammate Gagne and Herrin, who beat the Ducati rider in a photo finish. Elias crashed out...
15 min 31 sec ago

Defending champion wins ahead of Scholtz and Gagne. 5th and 7th, Wyman's and Jacobsen's two best Ducatis. Elias stopped by a problem.
16 hours 4 min ago

The reigning champion started has started 2020 in the best possible way, heading his teammate Jake Gagne. Race 1 at 22:00 on Eurosport
1 day 13 hours ago

In a video on You Tube, the driver defended his reasons but confirms the end of his experience with Audi in the Formula E
4 days 23 hours ago

It was decided by the Board of Directors via video conference call. Previously the FIM-Dorna contract provided for a minimum of 13 Grand Prix. In F.1...
6 days 17 hours ago

An embarrassing moment for Audi Formula E driver Daniel Abt who, during the virtual race in Berlin, had an eSports professional race in his place:...
1 week 11 hours ago