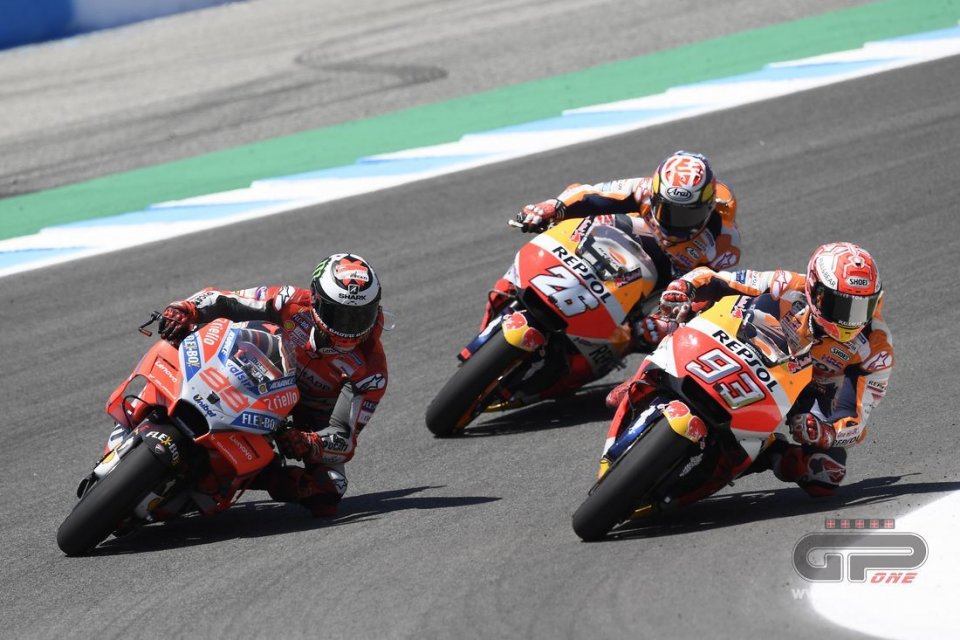 Farewell Pedrosa, welcome Lorenzo: the hypothesis that few would have bet on just a few days ago it to become reality. Two of the most successful riders in MotoGP will form a team that may well be referred to as a 'dream’. It's impossible to know whether Marc was thinking of Jorge when he stated he “wanted as strong a team-mate as possible” , but the Majorcan fits the bill perfectly.

Just as the places in factory teams seemed to have run out, Lorenzo and his manager have pulled a rabbit out of the cylinder, and it's pure gold. Jorge wont' return to Yamaha, where a factory bike with Petronas colours was waiting for him, but will embark on a new adventure.

Having proved he can win with the Ducati, he'll try to do the same with the Honda. If he manages it, he would be the first rider to win with three different bikes in MotoGP (if we count 500 too, the last rider to do so was Capirossi).

Not an easy path but definitely a fascinating one, because he will be face to face with the strongest rider right now, and riding the same bike. As for the weight of the pair, just consider how in the last six years Lorenzo and Marquez have taken all the MotoGP titles between them. A true battleship on paper then, and one to strike fear into any rival.

A pairing that promises sparks and one that now only needs the official stamp...

The Yamaha rider is at 51 wins in the stars and stripes top class. Nothing doing for his opponents. Jake Gagne, Mathew Scholtz, and Bobby Fong also...
2 days 5 hours ago

Thanks to the retirement of the leader of the classification Glenn Irwin in Race 2, the championship now sees four riders enclosed in only 12 points...
3 days 4 hours ago

Our popular “Frankie” confessed to being a victim of the degenerative disease, but he hasn’t given up: “The human body is like a motorcycle, if it...
4 days 1 hour ago

At Oulton Park the Australian took his second career victory. Nothing doing for Iddon, after leading the race for a long time. 5th championship...
4 days 5 hours ago

Jack: "I set my time thanks to Rossi and Bagnaia. Everyone will have tyre management in a corner of their brains". Fabio: "I'll try not to make a...
4 days 15 hours ago

Dominique Aegerter took his second win of the season overtaking the man from Rimini on the last lap, Ferrari finished in third place for having gone...
4 days 20 hours ago

“I tried to get more grip on the rear and didn’t succeed. It’s useless to waste time. I’ll focus on the front to brake like Ducati, Honda, and Suzuki...
5 days 6 hours ago