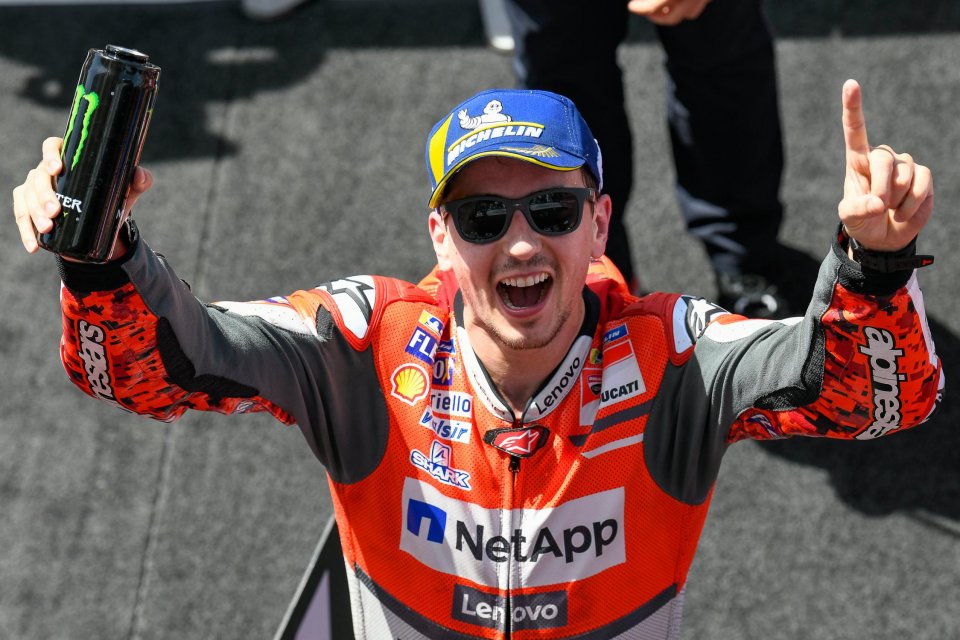 Jorge Lorenzo is a river of words after his first win with Ducati. He can finally get a lot of thoughts off his chest that he has kept inside for months and, thanks to the outstanding performance today, he can finally shed this burden. “I never gave up. I have a lot of pride and self-love. There were many difficult moments, but I always thought that I could win with this bike, exactly like what happened fifteen years ago when I rode the Derbi in 125. My father thought that winning with that bike was impossible, and instead I succeeded like I did today with the Ducati.”

Jorge conveys his message not only with words, but also with his eyes, and continues speaking.

“I knew that it would take time and a few things in order to express my potential, it’s just a pity that Ducati didn’t give me these parts sooner, because I’m sure that I would have earned a lot of podium finishes and maybe the first win would have arrived sooner. It’s no use thinking about the past now, though. This is the sweetest victory of my career and I am happy to have won on Ducati’s home track and to have brought joy to my fans after a difficult year and a half.”

Could this change the atmosphere of the Ducati – Lorenzo relationship? Jorge is very clear about one thing.

“Unfortunately, it is too late. I did not ride better because there was no pressure. If the parts that I had in this race had arrived in Jerez or six months sooner, the results would have arrived sooner. Gigi [Dall’Igna – editor’s note] believed in me, but a bit late. If he had believed in me 100% before, maybe now I wouldn’t be saying that it’s too late to stay with Ducati.”

“I may have a lot of defects, but honesty is one of my virtues. If I say something, it is true and it is not an excuse like many people thought. Gigi tried to give me a bike closer to my style. They succeeded in some aspects and in others they didn’t. The effort was there on my part and incidentally, when the latest parts arrived, I took the win.”

Jorge has something for everyone, and he continues to get things off his chest.

“I can accept any criticism, but not when they tell me that I am making excuses, so I hope that from now on people will believe me when I say something. Ducati made a significant investment in me. I didn’t make the move for money, but to win with this bike. There is a 10% difference between the Yamaha and Ducati pay. On one hand, we did not succeed. On the other hand, a bit of trust was lacking in technical terms. I think that Gigi, as well as Tardozzi and Ciabatti, would like me to stay with Ducati.”

For the Austrian and Styrian Grand Prix, a new medical service for the riders is scheduled for the next two weeks
16 hours 30 min ago

Team manager Jansess: "it's still not exactly clear what's wrong with Jesko." Maybe he'll be able to race back to Misano
19 hours 25 min ago

The Covid-19 pandemic remains a source of concern in Japan. As a result of stronger restrictions on entry in Japan, international teams and riders...
23 hours 29 min ago

The former 350 world champion, official Yamaha and Honda rider, will take part in the 'Motegi Endurance Race' on 23 August riding a CBR250RR. '...
1 day 17 hours ago

After having made contact with Josh Brookes, the Race Direction decided to disqualify the Honda rider from Race 3. He'll be starting last at...
1 day 20 hours ago

The venue for the last Grand Prix of the 2020 season has been unveiled, and it'll take place on one of the most spectacular tracks in Europe. The...
1 day 23 hours ago

In Race 2 the domination of the Irwin brothers with Honda Racing UK continued. Ducati returns to success with Bridewell in Race 3. Controversy in the...
2 days 23 hours ago