A Saturday that started badly and went downhill from there. There is disappointment on Marco Melandri's face, at the end of a race that saw him forced to wave the white flag seven laps from the end. The Aruba rider crashed at turn twelve while fighting for the top ten with team-mate Chaz Davies.

“We worked as hard as ever, but are still trying to understand why we're having difficulty at this track - up until now, it's been a complicated weekend, both in the wet and the dry”.

He then talks more about the crash.

“I completed almost all the race with Chaz and knew I was quicker in the first two sectors, while he was more competitive in the last one. I was struggling to pass him and simply wanted to stay as close as possible to him in the last corners. Unfortunately I lost the front and crashed”.

The Aruba rider is not looking for excuses.

“With the new rules, we've been struggling for a while with certain things, like stopping the bike and getting it to turn effectively. We need to continue to try and improve, one step at a time. Tomorrow is another day”.

Ducati can only console itself with Chaz Davies' eighth place finish today. The Welshman was lying tenth until one lap from the end when contact between Haslam and Razgatlioglu saw him gain two positions.

"Before the race I was quite confident despite the grid position. I thought I could fight for the podium, but unfortunately it didn't go that way and the race was harder than expected”.

“We struggled to find the right sensation, yesterday's crash didn't help of course because we lost precious track time, but I expected to make bigger steps forward today".

A tough race in the end.

“We didn't have much grip so I had to ride more smoothly to bring home the best possible result. Things change fast in this sport, I hope that we too can turn things around ahead of race 2”. 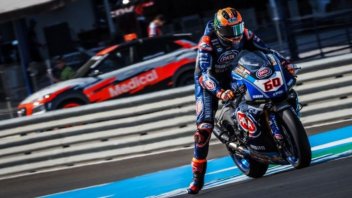 In a video on You Tube, the driver defended his reasons but confirms the end of his experience with Audi in the Formula E
2 days 9 hours ago

It was decided by the Board of Directors via video conference call. Previously the FIM-Dorna contract provided for a minimum of 13 Grand Prix. In F.1...
4 days 2 hours ago

An embarrassing moment for Audi Formula E driver Daniel Abt who, during the virtual race in Berlin, had an eSports professional race in his place:...
4 days 20 hours ago

Rainey: "With the way things are in California right now, there is no way we can race with spectators at Laguna Seca in July ". The series is set to...
1 week 5 hours ago