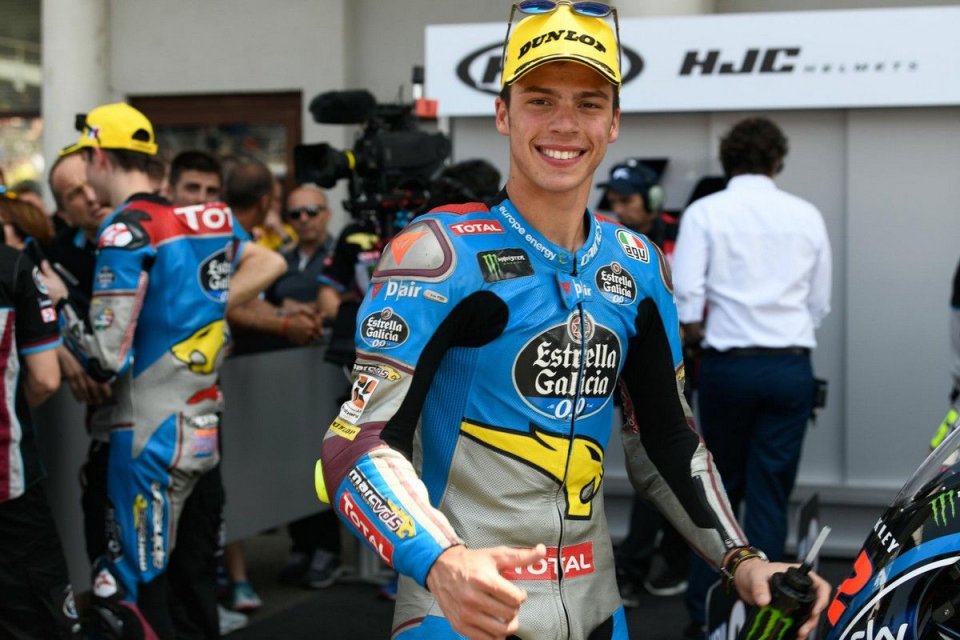 After his podium at Le Mans, Joan Mir's stock is on the rise. The current Moto3 champ, who moved to the Middle Class this season with the Marc VDS team and the Kalex, finished the French race in third place, just 4 seconds from winner Bagnaia.

Joan is growing in speed and experience, but also physically: his build is now more suited to a powerful 250 hp, 1000 cc bike and as we have recently said, several manufacturers - starting with Suzuki - and teams in the reigning class have him on their radar, meaning that this could be his first and last year in Moto2.

Particularly if, like today, Mir feels good with his bike: “yes, I want to go to MotoGP. I'm not particularly interested in trying to win the Moto2 title, I'd prefer to move to the top class. If I feel like I did at Le Mans, fast and in shape, I want to move to the reigning class. There are still some interesting seats availabel and, as 2017 Moto3 champion, moving to MotoGP in the space of just two years wouldn't be bad. Right now, I don't have a preference regarding bike, I'll see together with my manager which option is best for everyone”.

Joan's manager Paco Sanchez confirms the desire to move to MotoGP in 2019: “i think Mir is ready for the big jump, though I'd prefer him to stay in Moto2 for another season. There's a problem though, next year will see many changes to the Middle class, from the three-cylinder Triumph engine, to the new frame and a new riding style to adopt. I think it would be a waste of time to stay in Moto2, also because if a rider is fast, he's normally fast from the word go. So it's better to spend a year learning in MotoGP than to risk "stalling" in the intermediate class. People say not to rush, to keep calm but once he's in MotoGP, Joan will have to learn everything, how to ride such a complicated bike and take it to the limit, the secrets of each track. But I'm feeling positive, I feel he can do well in the top class too”.

What does Honda say? Is it true you have an already signed pre-contract with them?

“I can't say but what I can say is that my preference, and that of the rider too, is to make the step with Honda, but we're also talking with Ducati and Suzuki. These are the manufacturers at the top of our list, and I hope to reach an agreement as soon as possible”.

“I braked in the wrong place at the wrong time. I’ve had worst moments in my career, and I’ve always gotten out of them.”
8 hours 33 min ago