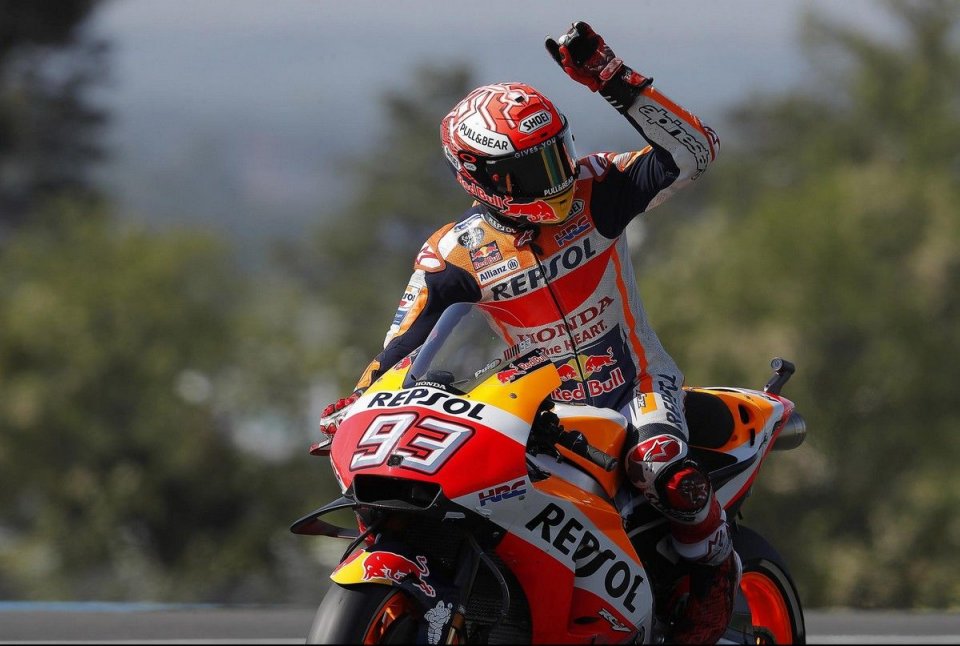 At Le Mans, the French fans had fun for a few laps, until hometown hero Johann Zarco crashed; with Iannone in the gravel after a few corners and Dovizioso on the ground a few laps later, the word “merde” came from the crown in chorus, when the Frenchman laid down his bike on Garage Vert, saying “adieu” to his first and much longed for MotoGP victory.

Marquez won again, taking his third triumph of the season and, almost certainly, he would have done it even with the number 04 factory Ducati and the Tech3 satellite Yamaha still on the track. In terms of race pace, number 93 was a missile, managing to control his front end from closing up with his usual nonchalance and madness, keeping the bike up.

Merit to Honda as well, or more precisely, to HRC, which brought a brand new aerodynamics package and carbon swingarm to Le Mans. Marquez put on a hard rear Michelin, looking after it very well on each of the 27 race laps. The defending champion looked over his shoulder only in the final lap of a French Grand Prix that he dominated from the first third of the race all the way to the chequered flag and after the win, he did not even seem winded: “It was a hard race – Marc revealed – It took time to get the tyres to work right. I am happy, because usually we struggle in Le Mans.” This is win number 38 in the Premier Class for him, equalling the score of a certain Casey Stoner.

With Zarco out and Viñales never a podium contender, it was up to Rossi to bring home a good and useful result for the factory Yamaha team, thanks to a spot-on tyre choice after the warm up with a medium on the front and soft on the rear: “We chose the right two tyres – Valentino explained – This is a very important result. I was fast throughout the race and I am satisfied with my weekend.”

Australian Jack Miller also did well, finishing fourth just six seconds behind the winner. Odds in his favour are increasing, as are those in favour of Petrucci. With a spot still open on the factory team, one of the two white-and-red Ducati riders could move in alongside the confirmed Dovizioso in 2019.

Dani Pedrosa finished his race with a respectable fifth place, coping with the many aches and pains suffered in this last month. Lorenzo led for the opening third of the race, only to fall back and finish after the number 26 Spaniard’s factory Honda.

Unlike Rossi, Maverick Viñales chose two soft tyres which were unable to guarantee the grip and speed he was looking for. His seventh place came in the finale, after winning a duel against the Honda piloted by an injured Crutchlow and Aleix Espargaró’s RS-GP. In spite of everything, the number 25 M1 remains second in the overall championship standings.

Alex Rins – another rider with a confirmed two-year contract renewal – rode the sole Suzuki left in the race across the finish line. The second GSX-RR still does not have a confirmed rider for next year. There are various contenders for the spot and, with his crash today, the preferences that would fall to Iannone appear to be waning. Pol Espargaró finished on the best of the KTM machines and Syahrin took home a good twelfth position. The Malaysian will now have time to celebrate Ramadan.

Three points for Franco Morbidelli, thirteenth, two for Bradley Smith and one for Japanese rider Nakagami. Redding and Rabat crashed out, with Alvaro Bautista suffering the same fate. 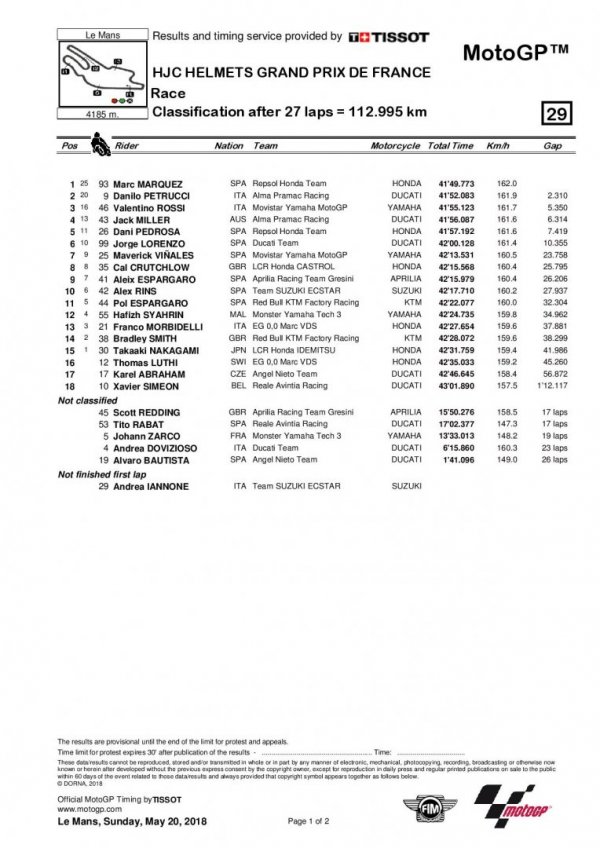