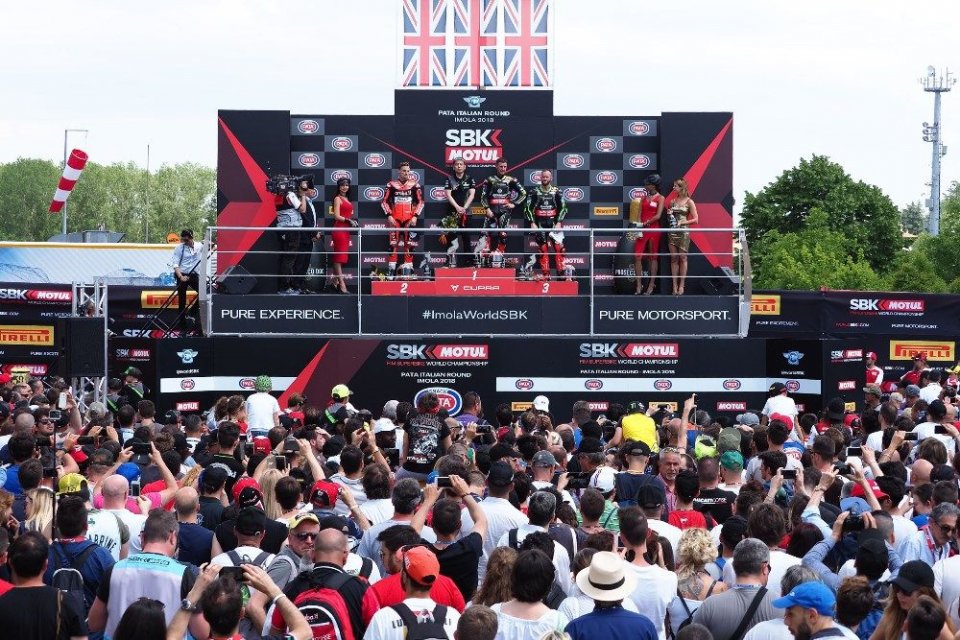 At Imola, all the attention was on the red bikes, but Johnny Rea soon set about ruining the party for Davies and Melandri, doing the double and extending his championship lead. Thanks to his latest success at the Santerno track, the three-time champ has matched Carl Fogarty's record on a day in which Imola pays homage to Kenan Sofuoglu as he retires from racing and applauds Ana Carrasco.

Hats off the Spaniard, after her second win in the Sport300 following that of Portimao last season. Over a weekend where the British, French and Spanish contingents shone, there was also room for a touch of Italian. Wildcard Matteo Ferrari scored his first Stock1000 win, riding team Barni's Panigale.

THE GOOD – It may be true that Rea ruined the party for the many Italian fans, but it has to be said that there was no booing as the Northern Irishman took to the podium. Only enthusiastic applause on the public's part, a strong message to all those who will be at Mugello from 1-3 June. Take note! A mention also for Kenan Sofuoglu, we're sure he appreciated the fans' warmth on the day of his retirement.

THE UGLY – After Friday's performance things were looking up for Lorenzo Savadori. But it didn't take long for a picture-perfect weekend to turn into one to forget, culminating in the race 2 crash. Onwards and upwards to Donington.

THE BAD – Loris Baz came to Imola hoping for confirmation following the Assen race weekend, but he soon realised that the weekend would be something of an uphill struggle. The BMW appears to be a wild horse and the Frenchman had to play the part of cowboy in trying to tame it.

THE DISAPPOINTMENT – If someone saw him, let us know. Apart from a sixth place in race 2, 'thanks' also to the incident between van der Mark and Melandri, the Imola round was one for Alex Lowes to forget. A tough three days for the Brit, who struggled with the R1 in braking and acceleration.

THE CONFIRMATION – he hadn't won at Imola for two years so it was high time Johnny Rea updated the stats. A double at Santerno, 59 wins in the SBK series, just like Carl Fogarty, and a significant championship lead. What more could one want in life?

THE PASS – That by Roberto Tamburini as he passed Maximilian Scheib around the outside through Tamburello. A move that awarded him a second-place finish, after lining up thirteenth on the grid.

THE MISTAKE– It's fairly obvious: this time Michael van der Mark really got it wrong, knocking Marco Melandri out of the race. The Dutchman tried to apologise but #33 was not interested, claiming that his rival never learns.

THE SURPRISE – Ana Carrasco, Matteo Ferrari, Raffaele De Rosa, Kevin Sabatucci: it's difficult to choose just one, so we applaud them all.

THE INTERESTING FACT – For Camier's injury, the Gagne's and finally O'Halloran's. The Honda team needs a blessing, proving extremely unlucky this season. Never before has the Ten Kate team scored zero points in two consecutive races.

I TOLD YOU SO – After winning Race 1, Johnny Rea was very clear about his goals for Sunday, stating: “I'll aim to finish second”. His words referred to the fact that Davies would be starting first, while he'd be on row three as a result of the inverted grid. What can we say:  don't read too much into the Cannibal's words!