It's not easy to explain what Valentino means to the world of motorcycling, English speakers call him the Goat (Greatest of all time). It's not just a matter of victories and titles, but also what the Doctor represents for a sport in which he's starred for more than twenty years.

And it is Rossi himself, in an interview given to Simon Patterson from Motorcycle News, who talks about what it means to be Valentino and the pros and cons.

“Having so many fans is just the price you have to pay, but as I get older I'm more relaxed about it all - says the Doctor - In the past it was difficult for me to understand that I couldn't have a normal life. I've always had a lot of fans but since coming back to Yamaha, and particularly after what happened in 2015, things have changed. It's as if I've become an icon, a hero of the sport. Before I was a good rider, but now it's something different”.

Some might say that Valentino is MotoGP and this is true in a certain sense. The fans camp outside the garage and hospitality during race weekends, an affectionate 'siege' but one that requires certain counter measures to be taken. Rossi has created a space of his own in Tavullia, the town where he was born and where he lives, the centre of his universe, from VR46 to the Riders Academy.

“A few years ago, I decided to live in Tavullia and, step by step, year by year, I built myself a castle - he uses a metaphor - It's a castle with many rooms and secret passages and when I'm there I can have a normal life. This was an important choice for my career, because if you live well, with less stress, it's easier to carry on".

The recipe seems to be working very well for Valentino, who as we know will continue racing until the end of 2020. A career that began in 1996, and one in which he's won so much: 115 races and, of course, 9 world titles. So many trophies that the Doctor couldn't ask for more.... or could he?

“In the end, I can't have any regrets. I've won so much. Sometimes I think that if I'd the mental strength that I have now back when I was 25, I would have won more. I was better than my rivals, but I was also human. I lived in a more relaxed way compared to other riders and don't regret that”

It seems that Valentino doesn't worry too much about the past, preferring to focus on the future. He doesn't want to have any regrets when the time comes to retire.

“When it happens, it will be because I've had enough of MotoGP and maybe, after 24 years, that will be the case - he jokes - In the end, I race for that feeling you get after a win or after a great race. That feeling that lasts for half a day: it's the only reason I'm here. I also think about other things, winning titles and races, but in the end those are just numbers. The important thing is that feeling”. 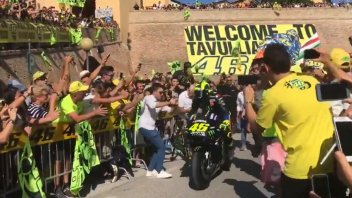 A mob scene in Tavullia for Rossi on the Yamaha M1

The Californian Yamaha rider took the flag alone ahead of teammate Gagne and Herrin, who beat the Ducati rider in a photo finish. Elias crashed out...
1 day 5 hours ago

Defending champion wins ahead of Scholtz and Gagne. 5th and 7th, Wyman's and Jacobsen's two best Ducatis. Elias stopped by a problem.
1 day 21 hours ago

The reigning champion started has started 2020 in the best possible way, heading his teammate Jake Gagne. Race 1 at 22:00 on Eurosport
2 days 19 hours ago

In a video on You Tube, the driver defended his reasons but confirms the end of his experience with Audi in the Formula E
6 days 4 hours ago

It was decided by the Board of Directors via video conference call. Previously the FIM-Dorna contract provided for a minimum of 13 Grand Prix. In F.1...
1 week 22 hours ago