As usual, Jerez will welcome the MotoGP to Europe after the first three events. Michelin is well prepared for the Grand Prix, one that will see it secure victory number 400 in the reigning class, not a difficult result considering the current single tyre regime, but the Spanish track does present some difficulties of its own.

The track has been completely resurfaced and the Clermont-Ferrand technicians have no accurate data, only information collated during the tests carried out by certain teams (including the factory Honda team with Marquez and Pedrosa).

As per the regulation, riders will have three options from which to choose (soft, medium and hard) but, while the front tyres will be symmetrical, rears will be asymmetric with a harder right side (there are 8 right-hand turns versus 5 left-handers). The same goes for the rain tyres, available in a soft and medium compound.

Michelin boss Piero Taramasso has this to say about the upcoming event - After three very demanding fly-away races and the three pre-season tests, it’s good to be heading back to Europe, but the task ahead is no less difficult. We are going to another track that has been resurfaced, so we have no real data as to how it will perform during a race weekend, but we have been able to gather information from tests that have been conducted there, so we are able to bring a range of tyres which we believe will be ideally suited to the new surface and give all riders the best opportunity to make the optimum choice to suit their style and bikes.” 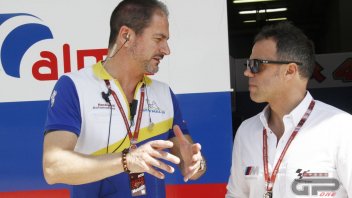