The first three races have always been a kind of mini-championship. Qatar, Argentina and Texas, a 'starter' before teams reach Europe and really get down to business. It's true that, in terms of their layouts and conditions, the three tracks are quite particular, but they have provided some important indications ahead of the first European round, taking place this weekend at Jerez.

For now, the classification sees Dovizioso leading the way, just one point ahead of Marquez, but things are perhaps not quite what they seem. To better explain, we've compared the various bikes' best results of 2017 and 2018. The table below summarises performance in the first three races of each season.

HONDA AND SUZUKI MOVE UP - It's clear that the RC213V has taken a step forward, just consider what happened in Qatar. Last year, Marquez crossed the line almost 7 seconds behind Vinales, while in March he battled it out with Dovizioso for the win right up to the last corner. At a track where both Marc and the Honda have always struggled, the step taken is clear to see. In addition, two different riders have won with the Toyko bike (Marquez and Crutchlow) and this further confirms its competitiveness. Add to this the fact that the factory team has recently tested at Jerez and you'll understand why Marquez is the man everyone wants to beat in Spain.

Suzuki also deserves a good score, having proved it knows how to react after what was a tough 2017. The fact that both Rins and Iannone have reached the podium confirms that the GSX-RR is on the right track. The figures also back this up: in Qatar the improvement in terms of gap would probably have been greater had Rins not crashed; in Argentina, Alex's podium proved this, as did Andrea's at Austin. The Texas race, run in more 'normal' conditions is the one that provides a more realistic picture of this improvement, Andrea crossing the line 9 seconds behind the winner.

DUCATI AND YAMAHA DROP BACK - You might think we're being harsh with the red team, but despite its win at Losail, the other races were not exactly convincing. In Argentina the race took place in strange conditions, but the fact that Dovi finished 22 seconds back cannot be overlooked (also considering the pace that Marquez was able to maintain throughout the race). Texas only highlighted the fact that there's still work to be done on the GP18, with a gap between Dovi and Marc that was in line with that of last year. Jerez is historically a tricky track for the Desmosedici, and so the event will serve to underline the latest version's strengths (and weaknesses).

For the opposite reason, you might say we're being too kind to Yamaha. Twelve months ago, we were talking about two out of three wins for the M1 with Vinales, while now the manufacturer has to settle for three podiums, though at least these were scored by different riders. The Yamaha crisis didn't begin this season though, and we are seeing some progress. Putting the frame issues aside, the electronics are now the focus. In Texas results were in line with those of 2017 and Maverick got his smile back. Europe will be an important test bench, allowing the manufacturer to understand whether it can be a part of the title fight.

APRILIA AND KTM FAIL - We expected more from the Noale bikes, though we have to admit that the 2018 RS-GP is a radically different machine that needs weaning. Espargarò's gap in Qatar came down to a problem on the final lap, but Aleix was nevertheless lying around 11th position, so we're talking about a 14 second gap roughly, double that of 2017. Ignoring Argentina, the almost 29-second gap in Texas also weighs heavily. Aprilia hasn't yet passed the test then, but is aware it can do more.

The situation is also far from rosy for new-entry KTM. For 2019, they will focus on Zarco, but they'll have to give him a better bike than the one we've seen so far this season. For now, the RC16 has not been able to cross the line with a gap of any less than 30 seconds from the front - too much. The Austrian manufacturer has the means (also financially-speaking, thanks to Red Bull) and the ability to climb back up, but the road is long and littered with obstacles. 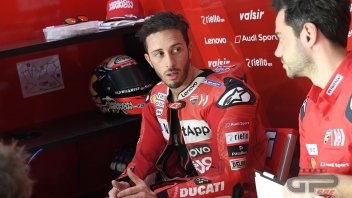 Dovizioso: "Marquez was dominating, but in Jerez it'll be different...