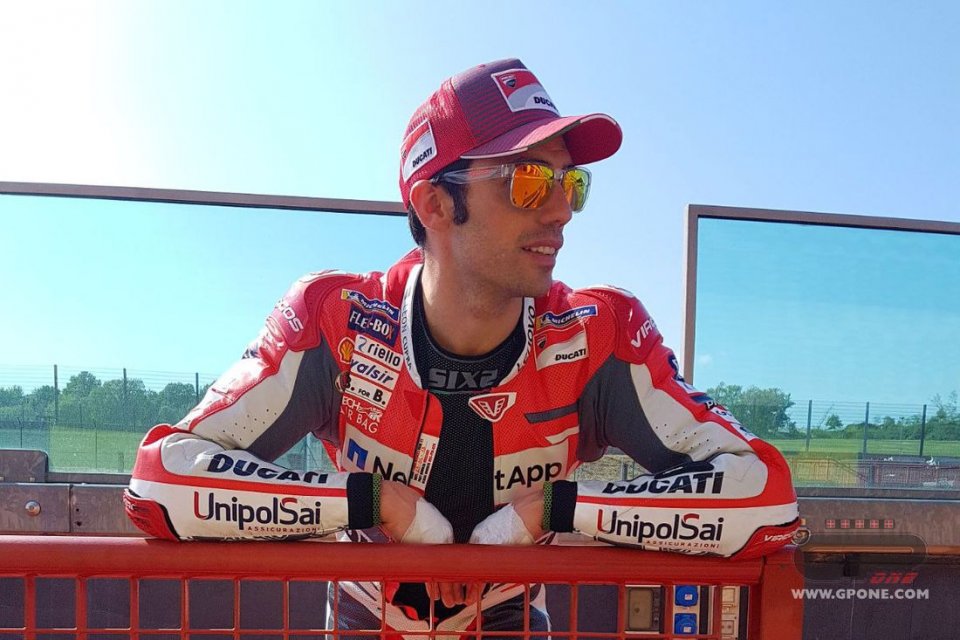 While his compatriots took advantage of the long weekend in Italy to go to the beach or take a hike in the mountains, Michele Pirro spent Thursday and Friday on the track at Mugello. “I had a nice long weekend on the Desmosedici” the Ducati tester joked at the end of the two days of testing astride the Italian bike.

“It had been basically since November since I had done a ‘real’ test on the beast - he continued with a smile - In the first two outings I had to regain my rhythm, re-familiarise myself with the GP18 and its speed.”

It seems like this year you have less work to do because of the limitations on testing…
“Ducati was the manufacturer penalised the most by this change. We created a structure, the test team, that is every bit as good as the teams that compete in the Grand Prix races and they made this rule to take away this advantage that we had acquired. The Japanese manufacturers wanted it this way and we have to adjust accordingly.”

The number of wild card spots has also gone down for you.
“I’ll race at Mugello, Misano and Valencia. I’m disappointed because I still feel like a rider who wants to race, but the races are a change to make important comparisons for development of the bike, too. I won’t have many chances, plus, being able to do fewer tests, it will all be even more difficult.”

What indications did you draw from these tests at Mugello?
“We are trying to improve the GP18 in in all areas, from the electronics to the engine, plus I tried a few solutions that may be useful for the race. We are busy on all fronts.”

The last two races were not very favourable for Ducati…
“I expected that because in Termas and Austin we have historically struggled. In Argentina there were also some very particular conditions, but I think with the 5th place in Texas, Dovizioso demonstrated that we have taken a step forward.”

However, the cornering problem remains. How can it be solved?
“Every bike has its own DNA and in ours, being fast on corners is still missing. This is a chapter of the Desmosedici’s book that we still need to write and even here at Mugello I felt certain limitations.”

Do you have some ideas?
“The guys keep working on it, but we can’t expect everything to be solved in just a few weeks. I am stumped too, because in recent years were managed to improve the bike consistently, but from this point of view progress is still insufficient. I don’t have a real explanation.”

Honda now seems to be the benchmark bike, don’t you think?
“Absolutely, especially with Marquez. I realised that from the first tests, watching them from trackside. Honda is the bike that has improved the most and you could see that from the performance put in by Pedrosa and Crutchlow. Last year they were lacking top speed. They put everything that was already good together with more horsepower and this is the result.”

So Ducati needs to play defence for now?
“The GP18 is a new bike that can still improve. We need to try to defend on the tracks where we will be in difficulty and attack when we have the chance.”

What do you expect from Jerez?
“In theory, the next two tracks will be difficult for us, maybe Jerez more than Le Mans. However, in Spain Lorenzo finished on the podium last year and I expect him to do well. Dovizioso will also be able to be fast – the rider always makes the difference.”